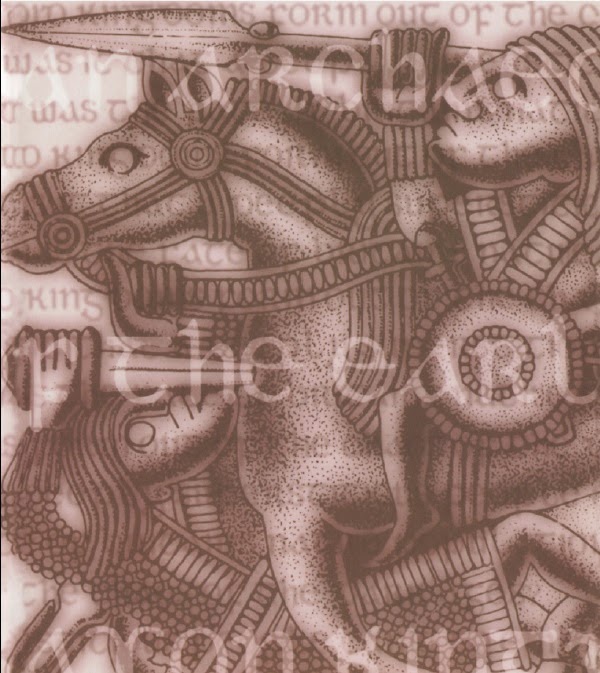 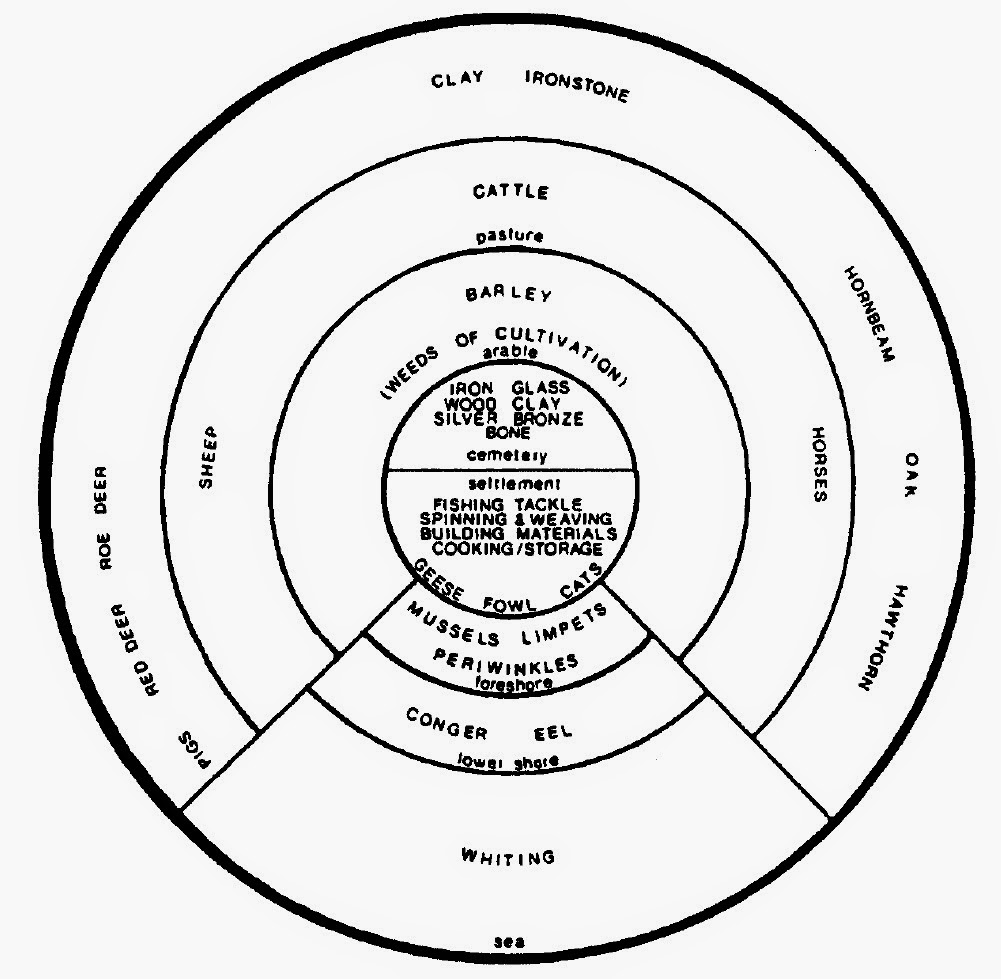 Diagram illustrating the resources exploited at the early Anglo-Saxon settlement at Bishopstone, Sussex. The evidence from the buildings and the cemetery is shown in the centre, surrounded by the resources derived from the sea-shore, arable fields, pasture and the Weald (data: Bell 1977)

An Anglo-Saxon farmstead could draw on a variety of environments to maintain the supply of essential resources. The evidence recovered from excavations emphasises that the landscape was being fully utilised by the inhabitants of farms, or groups of farms, dispersed across the landscape.

The extent of utilisation is exemplified by the settlement and cemetery excavated on a hilltop overlooking the English Channel at Bishopstone, Sussex, (Bell 1977). In the fifth century buildings were erected over an earlier farm and fields. In the pastures stood sheep, cattle and a few horses and roaming more freely were geese, fowl and cats. Growing in the arable fields during the summer months would have been a crop of barley amongst which various weeds were growing, including fat-hen, common orache and black bindweed. The food produced in this way was supplemented by marine resources: mussels, limpets and periwinkles gathered on the foreshore, conger eel from the lower shore and whiting taken from the sea; nets were made on the farm. The animals not only provided dairy products, meat, leather and wool for clothing; bone was used to make such things as combs, weaving tools and netting needles. In nearby woodland pigs were reared, and red and roe deer were hunted. Also taken from the woodland were oak, hawthorn and hornbeam used for building, for fuel and for the wooden implements found in the adjacent cemetery. Clay and ironstone were brought from the Weald to manufacture pottery, spindle-whorls, loomweights and a variety of iron implements including nails, knives, spears and shield fittings. Copperalloy and silver items were manufactured or acquired and eventually buried, along with considerable quantities of other material, as gravegoods in the community's cemetery.

This picture of subsistence agriculture varies little between settlements and any minor variations may be seen as the result of local environmental, social or cultural differences, survival or the recovery technique used in excavation. Some of the differences are most marked; for instance at Cowdery's Down, Hampshire, the large proportion of cattle bones is the result of the discovery of a complete cow on a site where generally few animal bones were found. There is generally little variation in the quantities of bones of each species found on settlements; at West Stow, Suffolk, the proportions of animal species and the particular bones were the same in all types of context.

The settlement of West Stow was located on the banks of the River Lark in the relatively dry Breckland region of East Anglia. This is reflected in the animal bone recovered (West 1985; Crabtree 1985, 1989a, 1989b). The environment was quite different from that at Bishopstone: the valley provided good pasture, while the river itself was home to fish and water fowl; the river terraces supplied good farmland; and away from the river terraces the higher slopes provided rough grazing. Analysis suggested that hunting of deer and other wild mammals and of birds was rare and that at all stages in the settlement's history cattle, sheep and goat, pig, horse, geese and chickens provided the majority of the meat diet; cats and dogs were present but apparently were not eaten. Typically the commonest domesticated animal was the sheep or goat, which was increasing in importance throughout the period in preference to cattle, unlike Continental settlements where sheep are less common. The sheep at West Stow were being used mainly for a combination of meat production and dairying, with a small amount of wool being used for domestic purposes (West 1985:93). Cattle at this time were generally goodsized, perhaps the result of the provision of reasonable grazing and implying successful husbandry. Horseflesh was more commonly eaten in earlier periods and on contemporary settlements on the Continent than at West Stow. The third most common animal found at West Stow was the pig which was being consumed in large numbers during the early fifth century.

This is surprising when the Brecklands are more suitable for sheep-rearing. Pigs were comparatively rare on the Continent at this time. Crabtree suggests (1989a: 210) that this may be because of the time it would have taken settlers to establish their herds of sheep and cattle; pigs on the other hand `mature quickly and multiply rapidly' and would be very suitable for such circumstances. This assumes, however, that the shape of the system of animal husbandry was driven by the needs of migrants. However, the differences between meat consumption and kill-patterns in England and on the Continent suggest different cultural influences. In contrast there was no change in butchery techniques and killpatterns between early Anglo-Saxon West Stow and in local Romano-British samples and there is no evidence for the introduction of new breeds in the fifth century. The evidence indicates that native traditions of animal husbandry were a greater influence than any Continental traditions that might have been introduced with the migrations.

At West Stow wild animals were not commonly hunted, their remains making up less than 1 per cent of the total. As a representation of the make-up of the diet this would seem to be typical although the quantity of wild animal bones does not necessarily convey their social importance. At West Stow these comprised red deer, roe deer, badger, hare, fox, beaver and the European brown bear as well as large water birds including teal, white-fronted goose, swan and crane. At Walton (Buckinghamshire) beavers, cranes, plover and redwing were identified (Farley 1976) but were equally rare. The infrequency with which wild animals were taken may be reflected in the similar rarity of the bow and arrow (Manley 1985). One bow was described by the excavator as about five feet in length' (Hillier 1856:30). In a Warwickshire cemetery, Bidford-on-Avon, were `several arrowheads of different patterns with closed sockets' (Humphreys et al. 1923:96- 7). The bow and arrow may be used as a weapon as well as for hunting game but it may be significant that not only are they rare in early Anglo-Saxon contexts but so also are other tools. The burial of weapons in graves appears to have been controlled by a particular set of rules and it may be significant that the bow and arrow is not included in that context. The rarity of the bow may also indicate that some hunting was restricted to particular social groups.

Animal husbandry in the early Anglo-Saxon period appears to have been designed to satisfy immediate local needs, but evidence that the situation was changing towards the end of the period can be found by comparing such food resources with those at the earliest post-Roman urban and commercial centres in England; Hamwic, the middle-Saxon port of Southampton, and Ipswich (Suffolk) have both seen large-scale excavation and have produced useful assemblages of animal bone. Middle-Saxon rural settlements, like those earlier, were supplied with domestic animals as well as some wild ones, whereas the latter are rare at Hamwic (Bourdillon 1979; Crabtree 1989b).

Although they were eventually eaten, the Hamwic sheep were not reared primarily for that purpose, and there are lower proportions of fowl and poultry than at early and middle- Saxon farms. The numbers of cattle on both rural and urban middle-Saxon settlements are very similar but their size is larger than their earlier counterparts suggesting some improvement, whereas there was no significant development in the size of pigs. The conclusion would seem to be that the early Anglo-Saxon countryside was managed differently, or not as efficiently, as in the following centuries. In the eighth and ninth centuries the killing age of domestic animals was earlier in rural contexts, whereas at Hamwic the bones do not reveal such early mortality, implying that the town, divorced from the wild, was not affected by the immediate hazards of the land or that it was supplied with animals of selected older age groups (Crabtree 1989b: 207). The early killing age at the early Anglo-Saxon settlement at Walton need not reflect success in animal husbandry.
Posted by Mitch Williamson at 4:21 PM