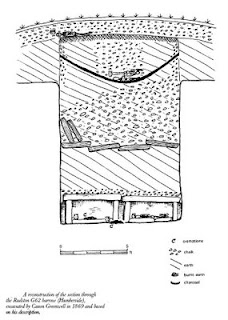 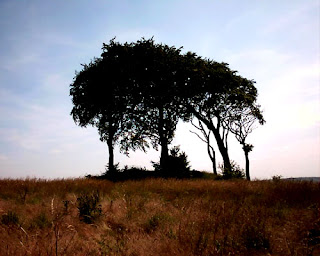 Copt Hill, Houghton le Spring: one of the barrows dug by Greenwell.

In the Pennines and parts of southern England a number of beaker inhumations and cremations might be placed together in the same grave. A complex example of a multiple burial was examined by William Greenwell in 1869 at Rudston G62 in Humberside. This barrow, on the chalk Wolds above Holderness, was 20 m. (22 yd) in diameter, but only 1.4 m. (4.6 ft) high, having been damaged by ploughing. Although the barrow must have been built in neolithic times, it had been disturbed late in the same period, when a circular shaft 2.8 m. (3 yd) in diameter was dug down through the mound and 3 m. (3.3 yd) into the solid chalk beneath, destroying any earlier burials. At the bottom of the shaft two rectangular stone cists or boxes were constructed. In one of them the body of a man had been laid, and near his legs were the skeletons of two small children. At his head was an unusual beaker decorated with grooved lines, and a piece of burnt ironstone. In the other cist were the cremated bones of two men and a few pieces of ox skull. In the corner was a second beaker containing ‘some dark coloured matter’. Between the two cists was another male cremation and a third beaker. The grave shaft was filled with earth which contained the mixed up bones of a man and child, probably disturbed when the shaft was dug. Above this was a layer of large sandstone slabs and more earth and chalk rubble.

After some time the surface of the refilled shaft had subsided, leaving a weed-filled hollow a little over a metre deep in the top of the barrow. The area was burnt clean and then the body of a young woman aged between 18 and 24 was laid on the bottom accompanied by a fourth beaker and a flint knife. Almost immediately above her the body of a man was placed and covered with soil. He, in turn, was disturbed when the corpse of an old woman was interred, together with a fifth beaker and two bronze awls. Lastly a young child was added to the shaft, before it was sealed by a layer of burnt earth and charcoal, perhaps representing a scouring of the surface. The barrow now contained at least a dozen burials.

In the early Bronze Age two further interments were made to the surface of the barrow, a woman with a bronze awl and pottery food vessel, and an unaccompanied middle-aged man. When the barrow was re-examined in 1968 four more crouched, secondary burials were found in the mound. None of these was accompanied by grave goods. Other barrows close by covered similar multiple burials, indicating intense activity in an area rich in neolithic ceremonial remains, which include three cursuses and the Rudston monolith, the tallest standing stone in Britain at 7.8 m. (8.5 yd) high.

Posted by Mitch Williamson at 2:31 PM