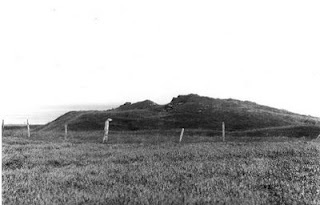 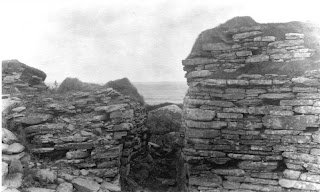 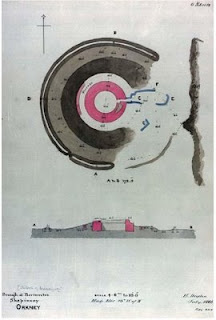 Situated on the NE coast of Shapinsay, the walls of the Iron Age broch at Burroughston still stand above first-floor level in places. Its entrance and adjacent 'guard' cell are similarly well preserved, while a wall, ditch and rampart, which probably once encircled the broch, are evident around the structure. These extra defences may have been constructed because of the broch's low-lying position in the landscape.

A broch, the base of which is fairly complete, stands close to the sea, some 32 yds from the low rocky beach. The site was excavated by Petrie and planned by Dryden about 1862 and the plan incorporates some features taken from Dryden's plan which are no longer to be seen.

Except on the E towards the sea, the broch is surrounded by a rampart rising 6'- 7' above the bottom of a ditch nearly 20' wide. The ditch is bounded on its outer edge by a parapet, parts of which still stand from 2'6" to 3' high and Dryden found traces of a stone wall on the inner side of the rampart some 9' from the broch wall. The broch has an average diameter of 33'6" within a wall 10' - 14' thick. The inner wall-face, showing a scarcement, stands approximately 12' high but the outer face was not laid bare in the 1862 excavations. The roofless entrance passage in the E has door-checks, bar-hole and guard chamber and the interior contains a 10' deep well and a later work now hidden by debris, but traces of radiating walls and compartments can still be seen. In the sloping area in front of the entrance the 1862 excavations revealed traces of "out-buildings" connected to the broch by an extension of the entrance seawards. These structures have now become covered with turf.


A broch with outworks . The outer face has been exposed in two or three places giving a wall thickness of 3.7m except in the N where it is only 3.0m but here the coarser masonry suggests a later reconstruction. The outworks probably once completely encircled the broch, but have been destroyed in the E by the later buildings. The name, though still known, is no longer commonly applied to the broch.


About 150m ENE from Easthouse, on the NE shore of Shapinsay, stands one of the most visually interesting brochs of Orkney. It was excavated c.1862 by Colonel D Balfour's estate-workers under the direction of George Petrie, and was subsequently meticulously recorded by Sir Henry Dryden. Excavation was confined to the interior of the broch and to a small area immediately outside the entrance; the interior is now choked with rubble which obscures the architectural features below the level of the scarcement. The entrance-passage is well preserved, and there is an impressive cell within a length of walling that still stands to a height of 3.5m above the rubble. Grazing has recently ceased on the site, which has thus become overgrown; the wet outer ditch and bank are still clearly visible.

Posted by Mitch Williamson at 9:43 PM No comments: 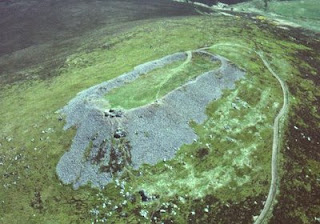 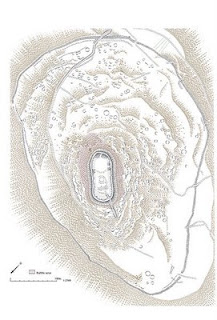 The Iron Age hillfort on Tap O' Noth is one of the largest in Scotland, consisting of 21 ha enclosed by a stone rampart. More than 100 house platforms have been recorded between the rampart and a massive wall that further protects the hill's summit. This stone and timber wall, more than 6m in width and 3m high, is vitrified in places - the stones have fused together through intense, prolonged heat. The extremely high temperatures generated by the burning timbers causes the surrounding stone to melt, and this phenomenon has been observed at many forts. On the summit there is a rock cut well or cistern.

The fort that crowns this site is the second highest in Scotland and consists of a single wall (now overgrown and heavily vitrified) which may have originally been more than 20ft (6.1m) thick and encloses an area about 335ft (102m) by 105ft (32m). A depression about 90ft (27m) from the S end represents the site of a well or cistern.

A second wall, mainly a row of huge boulders, lies low down the N and E flanks of the hill. Outside to the S of the fort platforms similar to those on which timber-framed houses were built have been noticed.

Tap o' Noth. Remains of 'an ancient fortress, formerly thought to have been the mouth of a volcano, but now known to be one of three forts constructed of stones vitrified by the force of fire, of which kind many have been lately discovered in Scotland'.

Francis Douglas, 'A general description of the East coast of Scotland', Paisley, 1782

At 563m the summit of Tap o' Noth offers as spectacular a view from a fort as you could hope to see. Northwards you look across the Moray Firth and obliquely up the Sutherland coast to Caithness, while eastwards the view embraces the breadth of Aberdeenshire to the North Sea. On a clear day the visitor could be forgiven for not even looking at the fort, with its huge scree of rubble dropping down around the summit and the massive lumps of vitrified stone, congealed masses of molten rock, lying in the rubble. Small wonder the first antiquaries to visit the site thought it was the crater of a volcano. This was a truly massive wall, faced with stone and laced together with timbers. But if its sheer scale impresses today, imagine it alight. With its timber frame on fire, reaching temperature in excess of 1000° C at its core, the fort would have glowed and sparked like a furnace. Imagine a display like that in the night sky for a week, an act of utter desolation visited upon every person living within its view. Could a fire on this scale really be an accident, or do the huge lumps of vitrified stone stand witness to a violent political act in a past that is very remote to us today.

Posted by Mitch Williamson at 9:38 PM No comments: