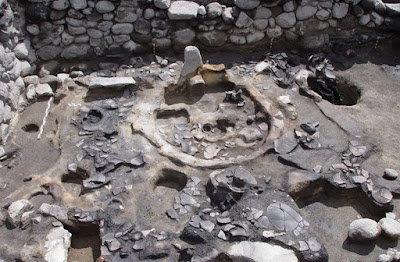 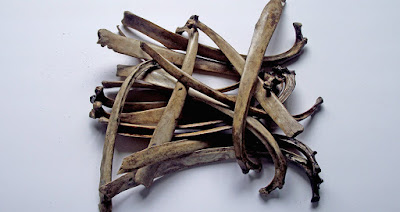 Each shrine consists of a single room with a clay basin filled with ash and ceramic vessels. A wide variety of finds were made in the shrines, including clay idols, stamp seals, censers used to burn materials, and large quantities of animal bones with markings etched into them. It is thought that during divination ceremonies rulers and diviners burnt substances and drank wine, possibly to induce an ‘altered’ state of mind.

“The logic of divination presumes that variable pathways articulate the past, present and future, opening the possibility that the link between a current situation and an eventual outcome might be altered,” write Adam Smith, professor at Cornell University, and Jeffrey Leon, a graduate student at Cornell, who excavated the shrines. Their discovery has been detailed in an article published recently in the American Journal of Archaeology.

Smith and Leon found examples of different types of divination. Knucklebones of bows, sheep and goats were found in Gegharot, indicating osteomancy (the practice of divination through the study of bones). “You would roll [the bones] and depending upon whether the scorched side or the marked side came up you would make a different interpretation,” Smith said.

In excavations from 2003–2011, archaeologists found three shrines about 3,300 years old nestled in an Armenian fortress in the town of Gegharot. Several similar installations were also constructed in Armenia at that time. They were most likely used for divination, probably as a way for local rulers to predict their futures.

Each one-room shrine contained a clay basin that held ash and ceramic vessels. Other artifacts suggest that the diviners drank wine and burned unknown substances to alter their mental states. “I would think that this is probably a cult center largely specializing in servicing the emerging rulers from the ruling class,” said Professor Adam Smith of Cornell University.

Armenia didn’t have a written language at this time, so the names of the rulers are not known. However, archaeologists discovered evidence at the site of three methods of divination: osteomancy, lithomancy, and aleuromancy.

Osteomancy uses animal bones to predict the future. You roll burned or otherwise marked knucklebones of cows, goats, or sheep. Your future depends on whether the marked or unmarked side of the bone comes up. With lithomancy, you supposedly use colored pebbles to foresee events, but the researchers don’t know how it was done. Finally, aleuromancy tells you what will happen using flour or baked dough balls, which may have been stamped with different shapes.

After about a century, the shrines were destroyed along with all the fortresses in this region, possibly in an event the overthrown rulers didn’t foresee.
Posted by Mitch Williamson at 6:29 AM No comments: