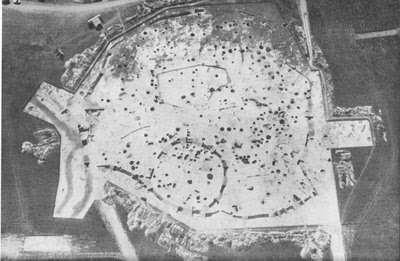 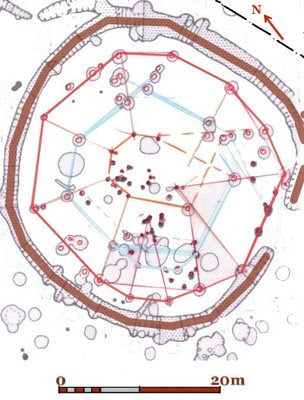 Sketch Plan of the Late Iron Age building at Gussage all Saints.
Most buildings are missed because archaeologists are looking for specific things; at Gussage All Saints, Geoff Wainwright was looking for roundhouses, so he missed the main late Iron Age structure. It. The Gussage All Saints building belongs to a class of annular roofed structures with ancient antecedents and has a massive timber outer wall set in a trench, topped by an annular roof. It is defensive in character, and in common with structures of this type, it’s not clear how the central space was treated. It could have been open, but it’s also the ideal place for the stairs.

Most Iron Age communities produced their own basic ceramics for food preparation and storage, textiles for clothing, and everyday implements of wood, bone, and antler. Many smelted local ore to make iron. In some regions where high-quality ore was abundant, larger-scale, specialized production developed early, as in parts of Schleswig-Holstein in northern Germany.

Since the constituents of bronze, copper and tin, are available in only very limited locations, for communities to have access to bronze to make personal ornaments, the metal had to be brought in from outside. Bronze objects are abundant in graves throughout the continent, showing that most communities had means for acquiring the metal, through the network of connected settlements. Molds for casting ornaments are relatively common on settlement sites, and their presence indicates that in many communities, someone knew the techniques of casting the metal. The molds were most often made of sandstone, and they may have been crafted by specialists and acquired by many communities for their own use.

The scale of iron production grew substantially during the Iron Age. By around 500 or 400 BC (it varied by region), iron had replaced bronze for tools, and by the time of the oppida in the final two centuries BC, very large quantities were being produced. Sizable numbers of iron implements are found at sites such as Manching and Stradonice, and extensive slag heaps attest to major production at many sites, including Kelheim on the Danube River in Bavaria. Metallographic analyses show that from the beginning of the Iron Age, some blacksmiths had learned how to make steel blades by alloying carbon with iron. By the final two centuries BC, a large proportion of the cutting tools were being produced of high-quality steel.

Until the time of the oppida, almost all pottery in western and northern Europe was handmade. Limited use of the wheel is evident at some Early Iron Age centers, but the technology was not further developed at that time. Only during the last two centuries BC do we find substantial proportions of pottery made on the fast-turning wheel, both on the continent and in southern Britain. This change indicates that pottery production shifted from a domestic craft to a highly specialized one, probably practiced by full-time potters. The fine, wheel-turned ceramics supplied not only the inhabitants of the centers, but also people in the smaller settlements in the countryside.

Recent excavations at many small settlements have produced important evidence that economic processes that had been believed to be largely restricted to the oppida, such as making pottery on the wheel and minting coins, were in fact carried out by numerous small communities. At Berching-Pollanten in southern Bavaria, a village community produced wheel-made pottery, fibulae, coins, and substantial quantities of iron, rather than depending for those goods upon the industries at the nearby oppida of Manching or Kelheim. In southern England, residents of a small farming community at Gussage All Saints cast ornate bronze ornaments for chariots and horse harness fittings. Such discoveries necessitate fundamental rethinking of ideas about how the Late Iron Age economy operated.

Posted by Mitch Williamson at 4:13 PM No comments: