REFLECTIONS ON THE ANGLO-SAXON HOUSE 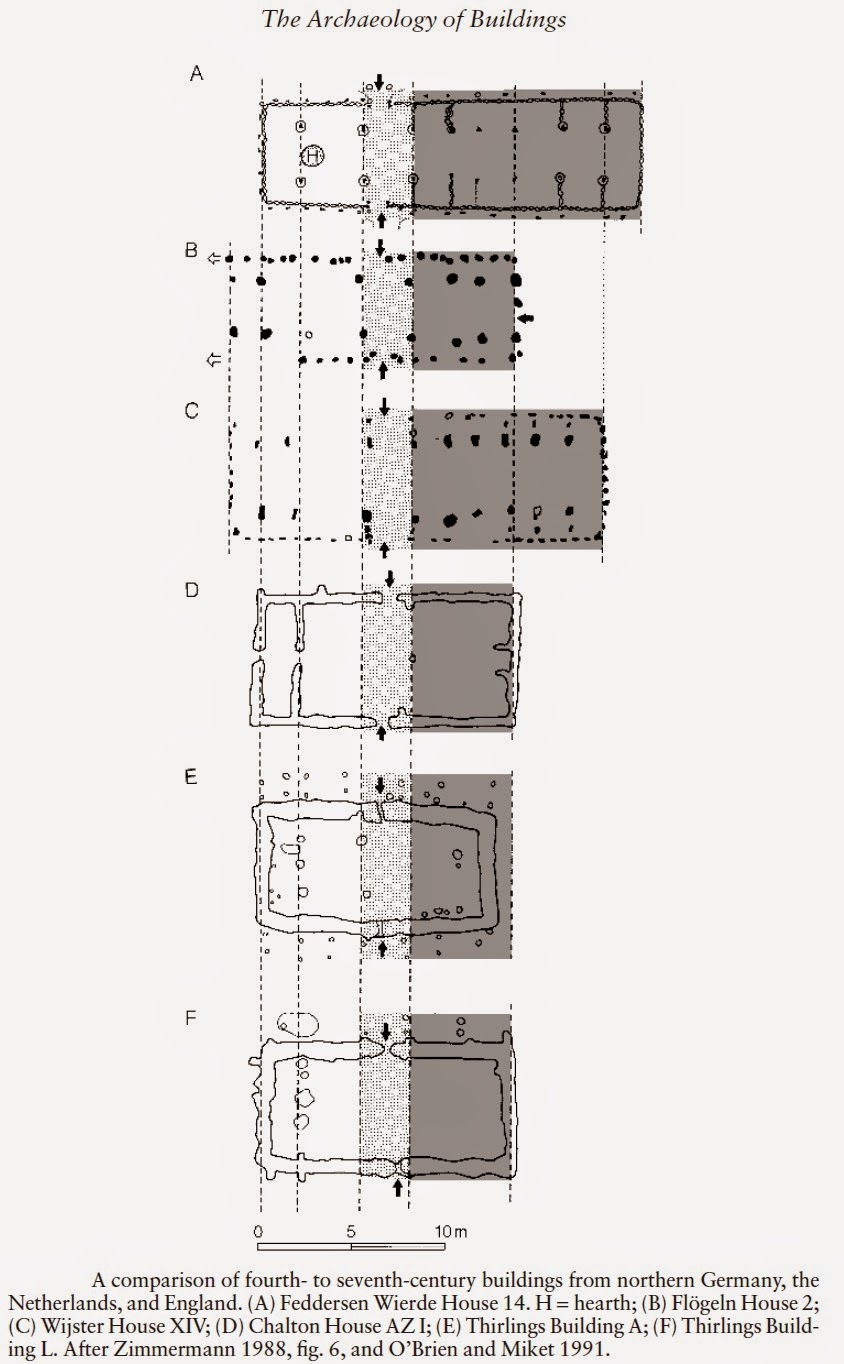 The archaeological evidence for Anglo-Saxon timber buildings is relatively limited in comparison to that of their continental counterparts, due to the lack of waterlogged settlements with preserved timbers and the relatively small scale (by continental standards) of most settlement excavations in Britain. In the first major survey of the evidence for the Anglo-Saxon house, published in 1958, Radford predicted that ground-level timber farmhouses similar to those at Warendorf would be found in England, were large-scale excavation to be adopted (Radford 1958, 28). Very shortly thereafter ground-level timber buildings were indeed recognized in England, but these were smaller and appeared less complex than the longhouses of continental farmsteads. They averaged around 10 to 12 m in length, lacked cattle byres, and supported the weight of the roof on the walls instead of on internal rows of posts. Even the larger buildings which began to be built in England at the end of the sixth and early seventh centuries, for example, at Cowdery's Down, Hants (Fig. 3.28; Millett 1984), appear to represent a distinctive architectural form which, while incorporating some continental features, did not closely resemble either the aisled longhouse of the Migration period or the later `Warendorf type' house.

The progress made in the forty years since Radford described the study of the Anglo-Saxon house as `one of the most intractable problems in the whole range of early medieval studies' (1958, 27) has been little short of revolutionary, yet key questions concerning the origins of Anglo-Saxon timber buildings, their chronological and regional development, and their functions remain unresolved.

Chronological Development
No detailed building typology comparable with those devised for Dutch, German, and Scandinavian longhouses exists for Anglo-Saxon timber buildings. The tiny number of well-dated buildings must be largely to blame for this, along with the irregularity and incompleteness of many excavated ground-plans. Furthermore, if the buildings of the fifth and sixth centuries represent a process of hybridization of indeginous and continental forms, as seems likely (see below), then this too could also help account for the lack of obvious `types'.

Some chronological trends in Anglo-Saxon buildings are nevertheless apparent. Recent work by Marshall and Marshall suggests that fifth-century buildings were uniformly small (i. e. less than 12 m in length), aligned east-west, and built using individual posthole construction (Marshall and Marshall 1993; Hamerow 1999a, fig. 3). An internal partition, usually at the east end, survives in roughly 25 per cent of buildings, a proportion which remained roughly constant throughout the fifth to seventh centuries. This formed a separate compartment which could be entered via an external as well as an internal entrance. The sixth century saw somewhat greater variation in the lengths and proportions of buildings. The use of foundation trenches was introduced towards the end of the century. The first large halls (i. e. with floor areas greater than 150m2) appeared c. 600. Very small buildings (i. e. less than 6 m in length) also became more common in the seventh century. Roughly half of seventh-century buildings were constructed using foundation trenches, and for the first time a significant proportion, roughly one-third, were aligned north-south. By the eighth and ninth centuries foundation trenches were used in more than 75 per cent of buildings, and a wider range of proportions came into use as the more coherent building tradition of the earlier period broke down, reflecting in part the emergence of monasteries and high-status secular centres. Of course, difficulties exist with this scheme, not least because of the small number of buildings (fewer than thirty) which can be closely dated.

Function
What little evidence survives for the layout of the Anglo-Saxon house suggests that, in contrast to the longhouse, it consisted essentially of one room, often with a small subdivision at one end. Very few Anglo-Saxon buildings contained traces of contemporary hearths, although this is likely to be due to poor preservation. 14 How we should interpret the one- or two-roomed Anglo-Saxon house is far from clear; indeed, not all timber buildings need have been houses. Cooking, storage, and so on may have been sited in separate buildings, as was the case in northern Germany and the Netherlands by the seventh or eighth centuries and in England by the tenth century, to judge from law-codes and other documents (Dölling 1958, 55 ff.).

Two explanations are generally put forward to account for the lack of a byre in Anglo-Saxon houses. The first is that the milder English winters eliminated the need to stable cattle indoors (Addyman 1972; Rahtz 1976, 61). While this may be part of the explanation (cf. Zimmermann 1999a; 1999b), it is worth noting that in Iron Age Denmark the longhouse remained in use even during warmer climatic cycles. It has also been suggested that cattle were simply less important in the Anglo-Saxon economy. While the proportion of cattle to sheep does indeed seem to have been lower than in continental Europe, the social value of cattle remained high, and Anglo-Saxon laws show them to have been the most highly valued farm animal. A third possibility, that there was strong cultural resistance to the concept of a `byre-house' by a romanized population (Roymans, pers. comm. 1998) appears anomalous in view of the widespread adoption of continental styles of dress, burial rites, and pottery and the close correlations in dimensions and layout between at least some English and continental buildings. The absence of the longhouse certainly implies a different relationship between the household and the animals which formed its chief source of wealth, but this is unlikely to be the result of a clash between `romanized' and `barbarian' ideologies.

Conclusion The apparent absence in England of houses with byres and internal roof-supporting posts remains, nevertheless, a largely unresolved problem. Why, when use of other forms of Germanic material culture (costume and dress ornaments, for example) was reinforced to act as group markers, should the longhouse, for centuries the traditional farmhouse, be given up so readily and so comprehensively when the sunken-featured building was retained? This seeming paradox is still more puzzling in view of cross-cultural studies which suggest that architecture `becomes so identified with groups, cultures and lifestyles that it is essential in order to feel at home', and that the re-creation by immigrants of their own architectural forms is an important factor in their adjustment to a new environment(Rapoport 1979, 16).

Two explanations for the absence of the longhouse in England and the origins of the Anglo-Saxon house are generally posited. The first is that `Germanic immigrants [adopted] British buildings . . . but still used their own constructional techniques developed . . . to imitate the fine stone buildings of early times' (James et al. 1985, 206). This appears to be ruled out by the close similarities in layout between the Anglo-Saxon house and timber buildings in regions well beyond the imperial frontier. The alternative is that many of the inhabitants of the Anglo-Saxon house were descendants of the Romano-British population who nevertheless sought to emulate the politically and socially ascendant group, in part by adopting their architectural forms as well as their burial rites and costume (ibid.). This is a much more likely scenario. We should, therefore, seek to explain the absence of the longhouse in England through the dual processes of migration and acculturation, and the resultant changes in the composition and economy of the household. The fact that sunken-featured buildings are found throughout early Anglo-Saxon England in a form apparently unchanged from the continent suggests strongly that the key issue behind the absence of the longhouse is not ethnic identity. The construction of a longhouse and associated buildings as seen in the enclosed, ancestral farmstead complexes of northwest Europe was a social act as much as a technical one; it required access not only to substantial material capital (i. e. timber) but also to considerable social capital in the form of reciprocal labour obligations. Such an undertaking would have required the voluntary assistance of an extended group beyond the household, possibly even beyond the village, and it seems likely that households in the fifth and sixth centuries simply did not have access to sufficient `social capital'.

More puzzling, perhaps, than the absence of the longhouse in England is the absence of an English version of the `Warendorf house'. Earlier in this chapter it was established that the building sequences seen in the Netherlands, Germany, and southern Scandinavia all reflect a general trend towards roof supports set within the walls, with external raking posts and bowed long walls. Variations of the `Warendorf house' are found all along the North Sea coast and in Denmark. It is all the more striking, then, that they do not make an appearance in England, where rectangular buildings continued to be built as before, although with more varied proportions and wall constructions and with an increased use of post-in-trench and plank-in-trench foundations which allowed for the construction of larger buildings. Relatively few eighth-century Anglo-Saxon building plans have yet been published, however, particularly from the trading settlements known as wics, and a closer examination of the buildings of this period is clearly called for. Even so, it is striking that the long-standing links between timber building traditions on the continent and in England appear to have weakened from the later seventh and eighth centuries, precisely when economic, artistic, and political links flourished.
Posted by Mitch Williamson at 8:29 PM No comments: