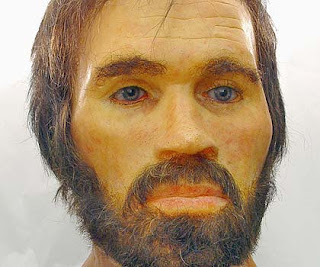 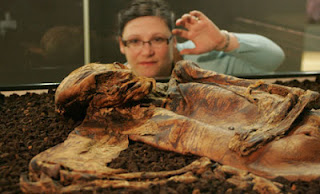 In 1984 the body of a man preserved in peat was discovered in Cheshire, England. Conserved in his entirety, the body of Lindow man provided archaeologists with a wide range of information about his life and death more than 2,000 years ago.

Approximately seven hundred hundred human bodies have been discovered in the peat bogs of northern Europe, but few survive intact, primarily because of the circumstances of their discovery, usually as the result of peatcutting machinery. Peat bogs provide waterlogged, anaerobic, and antibacterial conditions that preserve human soft tissue. Bodies of men and women have been found, but no children's bodies have yet been found. Many have been dated to medieval times by their clothing and accompanying artifacts, but the most interesting and best-preserved bodies date between from 2,800 years ago (ca. 800 BC) to AD 200, from the period of the European Iron Age until the Roman Empire. The most famous of these intact bodies are the Tollund, Grauballe, and Lindow men, named after the peat bogs from which they were recovered. While some of the bog bodies were the result of accidental deaths, some are wetland burials, some are murder victims hidden in bogs, and some would have been suicide burials excluded from Christian graveyards. A few are thought to have been ritual burials and/or executions.

The conservation and analysis of these bog bodies was pioneered by Danish archaeologist Hans Helbaek, who worked on both the Tollund and Graubolle men, who were found in peat bogs in central Jutland in Denmark. Tollund man, discovered in 1950, died 2,100 years ago (ca. 100 BC). Based on the account of the Roman historian Tacitus, who wrote about the practices of the Germanic tribes of the north in his Germania, we know that "cowards, shirkers and sodomites are pressed down under a wicker hurdle into the slimy mud of a bog," while "traitors and deserters," he also noted, "are hanged on trees."

It is possible that Tollund man was a criminal or a victim of ritual sacrifice. He was naked except for a pointy leather cap, and he had been strangled by the noose around his neck before being thrown into the bog. His last meal was a gruel of barley, linseed, knotweed, dock, and camomile seeds. Graubolle man was discovered in 1952. His throat had been cut, and he had been hit on the head as well. His stomach contents comprised sixty-three varieties of seeds, such as rye, buttercup, nightshade, clover, and spelt, and he had died 2,070 years ago (ca. 70 BC).

Helbaek's analysis of food residues laid the foundations for their continued use and refinement by archaeologists. Unfortunately, techniques of preservation were not so successful in the 1950s, and only the heads of the Tollund and Graubolle men survive in museums today.

Lindow man was luckier to be unearthed later in the twentieth century- when techniques of freeze-drying had improved, and he survives as he was found, because of the work of the conservation staff of the British Museum. Lindow man, however, had one leg missing-probably because of peat-cutting machines, which destroyed another two to three bog bodies lying near his before they were turned off.

Lindow man was approximately twenty-five years old when he died from being struck on the back of the head twice, garroted, and his throat cut. Perhaps he too was a ritual sacrifice. He lived during the first and second centuries AD. He was found naked except for a fur armband. As with the other bog bodies, everything was analyzed, from the species of fur on the band and the leather of the garrotte down to his blood group, the insects and pollen in the peat surrounding his body, and the contents of his last meal. His stomach contents comprised the remains of cereals, such as emmer, wheat, barley, and oats.

The decline in wetland areas across northern Europe, and the wide use of peat-cutting machinery mean that there will be even fewer bog bodies to analyze in the future. 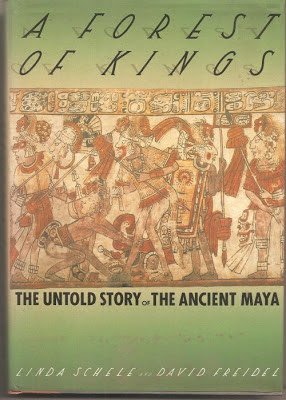 In 1990 Mayanists Linda Schele and David Freidel published AForest of Kings: The Untold Story of the Ancient Maya. Combining archaeological evidence with history deciphered from Maya inscriptions and glyphs, this popular book made the mysterious Maya more accessible to twentieth-century readers.

Linda Schele (1942-1998) had been deeply involved in the decipherment of Maya hieroglyphic writing and, by the 1980s, had developed a way of interpreting the essence of Maya society through the integration of studies of its art, archaeology, and hieroglyphic writing. This approach was exemplified in A Forest of Kings, which she cowrote with Freidel. Their story was one of war, territorial expansion, and the very great impact of ritual-particularly ritual associated with the passage of time. A Forest of Kings was structured around detailed discussions of each of the Maya centers that allowed Schele and Freidel to weave inscriptions, art, architecture, and archaeology into a persuasive tapestry of life among the classic Maya. Significantly, Schele and Freidel sought to maximize the impact of the deciphered inscriptions in the sense that they could "go beyond" the translated text and empirical evidence to produce plausible interpretations of Maya life.