Long Meg and Her Daughers

Despite their pervasiveness throughout the world, with thousands scattered across Britain and Europe alone, stone circles never cease to arouse awe and intrigue in those who gaze upon them. Perhaps it is the realization of the sheer effort that would have gone into their assembly, or the fact that, despite centuries of research, we are really no closer to unraveling their mysteries. Long Meg and Her Daughters, as it is curiously named, is one such stone circle, situated within a picturesque landscape in Cumbria, England, and steeped in centuries of folklore and legend.
While there are more than 1,300 stone circles in the British Isles, 18th century Cumbrian poet  William Wordsworth  wrote that after Stonehenge, Long Meg and Her Daughters “is beyond dispute the most notable relic that this or probably any other country contains.” His admiration for the stone circle is clearly expressed in his poem, “The Monument Commonly Called Long Meg and Her Daughters,” 1833:

A weight of awe, not easy to be borne,
Fell suddenly upon my spirit, cast
From the dread bosom of the unknown past
When first I saw that family forlorn..
Speak Thou, whose massy strength and stature scorn
The power of years—pre-eminent, and placed
Apart, to overlook the circle vast.
Speak Giant-mother!

While Wordsworth may have been somewhat biased by his love for his native land of Cumbria, there is no doubt that the stone circle is something special. Long Meg and Her Daughters is the second largest stone circle in England, and the sixth biggest example known in Europe, and despite the fact that at least 3,500 years have passed since its construction, it has survived the passage of time extraordinarily well.
Read more: http://www.ancient-origins.net/ancient-places-europe/legend-stone-circle-known-long-meg-and-her-daughters-003764#ixzz3yFzeqZ9r

Posted by Mitch Williamson at 8:02 PM No comments:

The Sacred Prehistoric Neolithic Complex of the Thornborough Henges 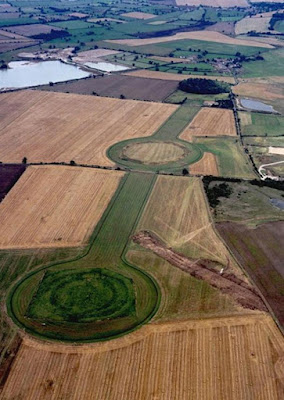 Drawing of the Thornborough Henges and cursus.

The Thornborough Henges are considered one of the most important ancient sites in Britain.  Consisting of a  triple henge alignment, it is a complex of three circular mounds with ditches and banks that was once part of a larger Neolithic landscape in use for over a thousand years. Historians believe this man-made, prehistoric structure had an astronomical significance and was purposely built to mirror the stars of Orion. Often called the ‘Stonehenge of the North,’ it is the largest ritual religious site on the British Isles.

Description of the Thornborough Henges

The Thornborough Henges are located near the village of Thornborough, in North Yorkshire, England and are thought to be between 5,000 and 6,000 years old..
They are part of an area known as the Vale of Mowbray which is a location known for its concentration of Neolithic and Bronze Age monuments. There are no less than six giant henges, all almost identical in size and design, located within 10km (6.2 miles) of one other.
The design of the henges sets Thornborough apart from later Neolithic complexes. It is the world's only triple henge complex and the three henges follow the same off-centre alignment seen at other triple-circles across England.
The length of the entire henge is approximately a mile (1.6km) long with two large entrances situated directly opposite one other.
All three of the Thornborough Henges have two entrances which are aligned, like the henge alignment itself, Northwest to Southeast, and laid out at approximately intervals, 550m (601 yards) apart.  All are of similar size and shape, have a diameter between 240 and 275 meters (787-902 ft), and stand some 3 meters (9 ft) in height.
The Northern henge is currently overgrown but is perhaps the best preserved of the three.  Covered by a small plantation of trees, it has a high bank with deep ditches and two entrances.  The southernmost of the three mounds had been damaged but is still recognizable as a henge structure.

The banks of the central henge have also been damaged with little trace of the interior ditch left. The central henge lies on top of an earlier, Neolithic cursus monument. Cursus are large parallel banks that have been marked using stones or ditches and are among the oldest monumental structures of the British Isles.
The fact that Thornborough was built over pre-existing Cursus suggests that it was an important ritual site to the Neolithic residents who lived there.
Some think that Thornborough may have been a pilgrimage centre where people sought spiritual salvation and that it served an economic, social as well as an astronomical purpose.
While it is unknown what kind of rituals were performed at Thornborough, the banks of the henges were coated in a brilliant white layer of gypsum or gypsum crystal (according to archaeological excavations that have been done at the central henge), which would have made the site visible for miles. Today the cursus are no longer visible above ground due to the continuous quarrying around the site. 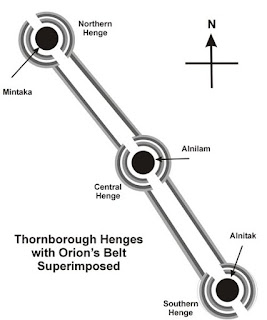 The Thornborough Henges are unusual in that the structure is in alignment with a well known constellation in the night sky. The lines joining the henges do not form a straight line but instead were intentionally shaped like a “dog leg” to reflect the stars of Orion’s belt.
This same astronomical alignment can be found at the Great Pyramids of Egypt, the pyramids of Teotihuacan, the pyramids of Xian, and also at the sites of the Hopi tribe in Arizona.
It is thought that the three Henges at Thornborough were constructed between 4000 and 3000 BC and the BBC makes note of the fact that Thornborough " may have been the first monument in the world aligned to Orion, predating the pyramids by 1,000 years. ”
The structure was aligned so its western end pointed towards the mid-winter setting of Orion which also meant that the eastern end aligned towards the midsummer solstice.
The southern entrances framed the rising of the brightest star in the sky, Sirius, and was also aligned on the midwinter solstice.

Posted by Mitch Williamson at 7:58 PM No comments: