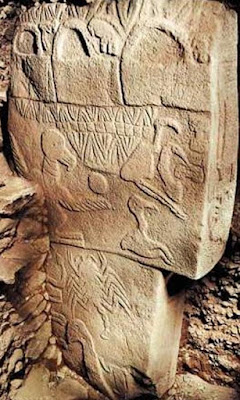 Excavations being conducted at the ancient city of Göbeklitepe in Turkey have uncovered an ancient pictograph on an obelisk which researchers say could be the earliest known pictograph ever discovered.

A pictograph is an image that conveys meaning through its resemblance to a physical object. Such images are most commonly found in pictographic writing, such as hieroglyphics or other characters used by ancient Sumerian and Chinese civilizations. Some non-literate cultures in parts of Africa, South America and Oceania still use them.

“The scene on the obelisk unearthed in Göbeklitepe could be construed as the first pictograph because it depicts an event thematically” explained Director of the Şanlıurfa Museum, Müslüm Ercan, to the Hurriyet Daily News. Ercan is leading the excavation at Göbeklitepe. “It depicts a human head in the wing of a vulture and a headless human body under the stela. There are various figures like cranes and scorpions around this figure. This is the portrayal of a moment; it could be the first example of pictograph. They are not random figures. We see this type of thing portrayal on the walls in 6,000-5,000 B.C. in Çatalhöyük [in modern-day western Turkey].”

The artifacts discovered in the ancient city have provided information about ancient burial traditions in the area in which bodies were left in the open for raptors such as vultures to consume. According to Mr Ercan, this enabled the soul of the deceased to be carried into the sky. It was called “burial in the sky” and was depicted on the obelisks in Göbeklitepe. Such rituals were conducted in and around the city around 12,000 years ago.

Many of the items discovered on the site have not been seen before anywhere else in the world and thus are the first of their kind to be discovered.

Göbeklitepe is situated on the top of a hill about 15 kilometres away from Sanliurfa in South-eastern Turkey. The city can be dated back to 10,000 BC and consists of a series of circular and oval shaped structures that were first excavated by Professor Klaus Schmidt supported by the German Archaeological Institute. Schmidt travelled to the site having heard about it from accounts of other previous visits by anthropologists from the University of Chicago and Istanbul University in the 1960’s. Both institutions ignored the site, believing it to be nothing more than a medieval graveyard.

Artifacts found on the site indicate that the city was intended for ritual use only and not as a domain for human occupation. Each of the 20 structures consists of a ring of walls surrounding two T-shaped monumental pillars between 3 metres (9 feet) and 6 metres high (19 feet) and weighing between 40 and 60 tons.

Archaeologists believe these pillars are stylised representations of human beings because of the human appendages carved into the stone. These images are accompanied by those of animals including foxes, snakes, wild boars, cranes and ducks.

The archaeologists believe Göbeklitepe was used as a religious centre. Geo-radar work has revealed evidence of 23 temple structures in the area. Two of the obelisks in the city were constructed in the form of a letter T and are positioned opposite each other within a circle of smaller, round obelisks.
Ercan said that the museum at Şanlıurfa contains a small sculpture of a pig that was discovered in front of the central stelas in the ‘C’ temple at Göbeklitepe. Such statues may have depicted sacred beings.

Work on the basic infrastructure of a roof to cover the site and help preserve its structures and artefacts has just been completed, ready for the construction of the roof itself. This is an EU project and the archaeologists aim to complete it in eight months’ time.

Posted by Mitch Williamson at 2:33 PM No comments: