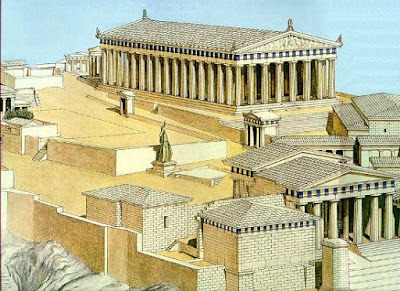 The Parthenon in Athens

The images of gold and ivory, which were set up in the years after 430 BCE in the temple of Zeus at Olympia and in the Parthenon in Athens, required new interiors because they were far larger than life. In Olympia, the temple had already been built thirty years earlier, whilst in Athens the time-gap was only about ten years. Here, the extensive interior with columns running all around the image of Athena Parthenos underlined the powerful effect of this image, while the conventional positioning in the temple at Olympia created a conflict between image and interior, which later found its expression in the slightly ironical statement that Zeus when he rose from his throne, would break the roof of the temple.

The solution found for the Parthenon was crucial for the subsequent period, as is shown by the string of varied solutions it inspired in many temples of the late fifth and fourth centuries BCE. The temple in Epidauros is a good example, as are the temples of Athena in Tegea or that of Zeus in Nemea. The surrounding colonnades underlined the autonomous manifestation of the interior, which was also expressed by employing other architectural orders or by their close connection with the walls.

Whilst during the archaic and early classical period the columns in the interior of the temples did not usually differ from those of the outer order, and thus emphasized the strong coherence of the entire building, the interior later became a sort of precious room, introverted and closed around itself like a small treasure chest.

At the same time, new forms and effects were used to attract visitors, as is already visible in the late Archaic Temple of Athena at Paestum in which Ionic columns were used in front of the cella in contrast to the Doric columns that surrounded the rest of the exterior. In the various temples of Athens these zones of transition later came to be emphasized by means of the inner friezes.

The overwhelming aesthetic effect of the cult images in the Classical period was probably the result of the increase in ostensive power demonstrations in these times, in which these images were used by the cities. The best-known example is the Athena Parthenos, laden with gold plates which formed part of the treasure of the Athenian confederacy, and therefore had to be weighed each year. The statue of Zeus at Olympia was an expression of the new position of Elis, now organized as the main polis connected to the sanctuary; the situation was probably similar at Epidauros with the temple and image of Asklepios. Besides these new forms, however, the old images of the gods still existed and kept the old tradition alive.

These new forms were crucial for further developments. The isolation of the interior of the temples corresponded to certain changes in the appearance of the images of the deities themselves. It has often been observed that, particularly in the fourth century BCE, these images seem to be concentrating on themselves, giving the viewer the impression that they are tranquil, quietly reposing in themselves. The experience of epiphany was thus created in a new way, causing the viewer to appear even more surprised by contrast. This seems to agree with the idea that the images should not be more than life-sized. The statue of Aphrodite by Praxiteles, which was commissioned by the citizens of Knidos, showed the goddess naked for the first time, as far as we know. Whether it was placed in a round building depends on the interpretation of a possible copy in the villa of Hadrian at Tivoli. But tholoi with their circular cellae, which became common in this period, were certainly well suited to bring out the new quality of these effects (Despinis 1979, 2005; Elsner 1996; Scheer 2000; Fehr 2001; Nick 2002; Mertens 2006).

A special case, the temple of Eshmun in Sidon, provides us with a significant sidelight on Greek understanding. The outer form follows the Greek prototype to the letter, but the image is enclosed in a sort of canopy with columns following Iranian models. The details are not well preserved, but in contrast to the Greek models which aim to create distance between image and visitors, the interior of the temple at Sidon allows the image to dominate (Stucky 2005).

The Hellenistic period is characterized by different strategies to emphasize the cult image. Even royal residential towns often feature only small temples with corresponding interiors. The Pergamene kings never had – or never carried out – the idea of transforming the ancient temple of Athena on their acropolis into a magnificent building based on the Athenian model, although they did imitate this model in some other respects and sufficient financial resources were certainly available. The same is true even of Alexandria and the Ptolemies.

The splendor of the interior was achieved by means other than size. Often there are huge bases with groups of images, as in Lykosura or Klaros. Often, images of rulers were added, such as in the Temple of Hera at Pergamon or in the Temple of Dionysos at Teos. The appearance was also enriched by canopies, various forms of interior boundaries, honorary statues and mosaic floors. In a particularly unusual case, Antiochus IV dedicated a purple curtain to shroud the statue of Zeus in the temple at Olympia. This undoubtedly theatrically increased the epiphanic effect. The new temple of the poleis were, however, often very large, such as those in Magnesia on the M. for Artemis or for Apollo at Klaros.

No dominant pattern emerges in the design of the interior spaces at this time. Everything seems to have been possible, from rich colonnades lining the walls, as in the temple of Leto at the Xanthian Letoon, to the simple smooth inner walls. Even the Archaic and early Classical concept of rows of columns that lead into the interior towards the cult image was used again (with some modifications) in the temples of Artemis at Sardis and Magnesia, where the anteroom was more strongly structured with various forms of transitions and barriers (Cain 1995; Faulstich 1997; Bergbach-Bitter 2008; Mylonopoulos 2011).

Posted by Mitch Williamson at 6:52 PM No comments: 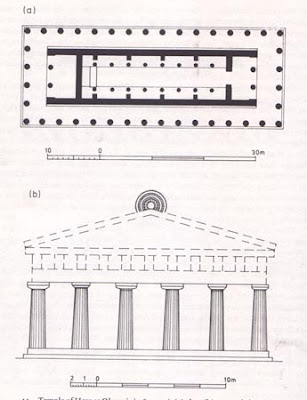 One of the best preserved examples is offered by the temple of Hera at Olympia in which external appearance and the interior work together to maximize the monumentality.


The temple, as it characterizes the Greek cities of the Archaic and Classical period, originated in the Geometric period. No similar buildings are known from the Minoan-Mycenaean period and it is possible that the palaces performed some of their socio-religious functions. From the Geometric period onwards, however, remarkably large houses suddenly served to gather a community around a central hearth. The image of the deity had its place against the back wall, but not always in a central position; a famous example is the group of Sphyrelata of the small Cretan village of Dreros that represent Apollo, Artemis and Leto. The space inside these buildings was not subdivided for ritual and religious purposes – an observation that is significant insofar as image and worshippers became more and more separated in later periods. The aura of these early images was rather created by their method of manufacture, size and other accessories.

Since the eighth century BCE and with the growing articulation of the polis the temples became more and more monumental, many of them reaching lengths of 30.5 meters. In addition, the ornaments also served to make these qualities more visible. The inner space transformed into a long corridor, at the end of which the cult image had its place. There is no clear linear development of these constellations; instead, the tension between the different zones of the temple, the entrance, the cella and the image at its back wall leads to different solutions. The design of the individual segments, of the pillars, the porch or the doors, or of the interior space likewise augmented the emphasis on the cult image at the end of this movement. One of the best preserved examples is offered by the temple of Hera at Olympia in which external appearance and the interior work together to maximize the monumentality.

During the Geometric and Archaic period, the temple in general and its interior in particular served to create a strong link between the community and the cult image, and we see a noticeable shift towards a more abstract and isolated presentation of the image. While in the early periods it had been included in the meeting of the community during the ritual dinners, the image became more and more isolated in the interior over time and the dining rituals came to be excluded from the buildings. This was an expression of the newly-defined position of the image, which was important: on the one hand it was available to everyone, but on the other it was secluded in the interior to increase its numinous effect (Drerup 1969; Gruben 1966; Kalpaxis 1976; Mazarakis Ainian 1988; Hellmann 2006; Boschung 2007; Lippolis, Livadiotti, and Rocco 2007; Mylonopoulos 2010).
Posted by Mitch Williamson at 6:47 PM No comments: