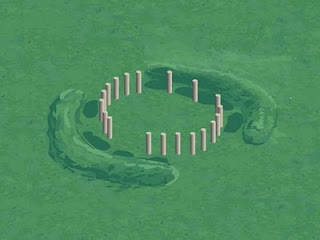 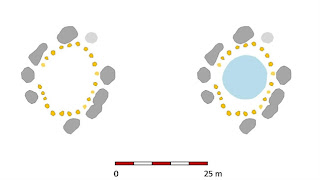 London, England (CNN) -- Archaeologists studying the iconic Stonehenge monument in southern England have uncovered a second prehistoric henge-like circle only 900 meters away, which they hope will shed more light on the mysterious stone landmark.

The remains, comprising a circular ditch surrounding a ring of 24 internal pits up to one meter in diameter and designed to allow posts to support a free-standing, timber structure up to three meters high -- are thought to date from the late Neolithic period, some 4,500 years ago.

"Although it would have been made out of timber rather than stone, it's comparable in scale to the existing Stonehenge monument," said Henry Chapman of the University of Birmingham in central England.
Chapman was one of the British-led team involved in a multi-million dollar project to "map" the World Heritage site, using state-of-the-art imaging technology to recreate "virtually" the iconic monument and its surroundings.

The images, which resemble a lunar landscape, provide an outline of the circle buried under the surface with its opposing north-east and south-west entrances, together with what archaeologists believe to be a burial mound in the center.


This discovery is completely new and extremely important in how we understand Stonehenge and its landscape.
--Professor Vince Gaffney


"Rather than giving us a map or plan of what is buried, this technology allows us to see it in three dimensions," Chapman told CNN. "We can almost excavate the site virtually by peeling off five centimeters at a time to see what is there."

Project leader, Professor Vince Gaffney of the University of Birmingham, hailed the find as one of the most significant yet for those researching Britain's most important prehistoric structure.

"This finding is remarkable," he said in a statement on the university's website. "It will completely change the way we think about the landscape around Stonehenge.

"People have tended to think that as Stonehenge reached its peak it was the paramount monument, existing in splendid isolation. This discovery is completely new and extremely important in how we understand Stonehenge and its landscape."

Chapman added that the find may be the start of an exciting new chapter at Stonehenge. "We're just in the first year of a four-year project, so we'd expect to find lots more between the known monuments we see at present and hopefully fill the gaps in our knowledge," he said.

Debate has raged about the origins and purpose of Stonehenge, located on Salisbury Plain approximately 90 miles west of London.

Known for its orientation in relation to the rising and setting sun, the circle of stones represented a prehistoric temple to some. Others argued it was an astronomical observatory. Or that it was a marker of time.

But last year, archaeologists unearthed a new stone circle a mile from Stonehenge that they said lent credence to the theory that the famous monument was part of a funeral complex.

Dubbed "Bluestonehenge" after the color of the 25 Welsh stones of which it was once composed, the new find sat along the banks of the nearby River Avon.

University of Bristol archaeologist Joshua Pollard suggested Neolithic peoples would have come down river by boat and literally stepped off into Bluestonehenge. They may have congregated at certain times of the year, including the winter solstice, and carried remains of the dead from Bluestonehenge down an almost two-mile funeral processional route to a cemetery at Stonehenge to bury them.


The latest project, which is supported by the site's landowner, the National Trust, and facilitated by English Heritage, brought together the most sophisticated geophysics team ever to be engaged in a single archaeological project in Britain, involving archaeologists and other specialists from the UK, Austria, Germany, Norway and Sweden.
Posted by Mitch Williamson at 1:36 AM No comments:

Between 1949 and 1953, Grahame Clark directed the excavation of Star Carr, a lakeside, early Mesolithic site in northeastern Yorkshire, near the town of Scarborough. The waterlogged nature of the site meant that the preservation of the organic artifacts and remains was excellent. Pollen analysis and the remains of trees at the site were evidence of a lakeside, forested landscape, around two hundred years after the ice cap had retreated.
As the expert on the European Mesolithic, Clark was the ideal director of the excavation. Clark had based his revolutionary books on the Mesolithic period, written in the 1930s, on data produced by other people. Here was his opportunity to excavate and interpret new data and to compare it with previous data sets. Star Carr was an exemplary site.
The assemblage recovered from the site comprised simple microlithic (small) stone tools in the shape of barbs and arrows; flint scraps and burins used for working on antlers and bones; awls and axes; barbed spearheads made from red deer antler; elk antler mattocks for digging; scrapers made from wild ox bone; and a number of what appear to be masks made from red deer antlers, which may have been used as hunting camouflage or for ceremonial purposes. The remains of a wooden paddle were also found. Analysis of the animal remains revealed the subsistence patterns of the occupants and the nature of the social groups who used it. The animals they hunted included red deer, elk, roe deer, wild oxen, elk, wild pigs, and water fowl. There were no fish remains—perhaps they were not available in the lake this early, but the remains of two domestic dogs were found, among the earliest remains of this kind in Europe.
Based on the amount of animal bone found it was estimated that the site supported a group of around twenty-five people annually over a six-year period. However, if the occupation had been more intermittent, then the period of occupation was probably longer. The bone and antler technology, such as sickles and barbed points and arrows, was as distinctively Mesolithic as the lithic artifacts. Clark concluded that Star Carr was a specialized seasonal hunting and butchering site rather than a long-term occupation site, probably used by groups who moved on, depending on the season, to other camps on the coast or up onto the moors in the hills.
Excavations at Star Carr was published in 1954, and it reflected the careful analysis and resulting scope of interpretation by Clark and his colleagues. There were chapters on lake stratigraphy and pollen, animal bones, and the flint, bone, and antler tools.
Since 1954 other interpretations (and further excavations) have been made at Star Carr. It is perhaps the most eloquent testimony to the significance of the site, and the issues initially addressed by Clark, that it has continued to attract such attention and disagreement.
Further Reading Clark, J. G. D. 1932. The Mesolithic Age in Britain. Cambridge: Cambridge University Press. Clark, J. G. D. 1952. Prehistoric Europe: the economic basis. London: Methuen. Clark, J. G. D. 1954. Excavations at Star Carr. Cambridge: Cambridge University Press. Fagan, B. 2001. Grahame Clark: An intellectual biography of an archaeologist. Boulder, CO: Westview. Legge, A., and P. Rowley-Conwy. 1988. Star Carr revisited. London: Birkbeck College. Mellars, P., and P. Dark. 1998. Star Carr in context. Cambridge: McDonald Institute for Archaeological Research.
Posted by Mitch Williamson at 11:00 PM No comments:

Jarmo is an archeological site located in northern Iraq on the foothills of the Zagros Mountains.
From the beginning of his career Robert Braidwood (1907–2003) was interested in the theories of Gordon Childe and others about the origins of civilizations. After World War II he began to search for a Near Eastern site that would provide evidence of the “Neolithic revolution.” Following the theories of Childe, this was widely believed to have been the transition from hunting and gathering to farming and herding communities. As such this transition would represent the first rung on the ladder to the later development of early urban or city-state–based civilization, one likely triggered by environmental and population pressures.
Jarmo was a small village site in northwestern Iraqi Kurdistan, on the “hilly flanks” of the Zagros Mountains. Braidwood deliberately chose a site in a topographic zone where wild resources overlapped with domesticated ones, and where farming without irrigation would have been possible. The data from such a site would be different from what would have been obtained at sites in the “the fertile crescent” closer to the Euphrates and Tigris rivers. Braidwood and his team discovered that this small village had been occupied by a community between 100 and 150 people for several centuries during the seventh millennium BC. The deployment of a multidisciplinary team comprised of paleobotanists, zoologists and geologists, radiocarbon and ceramic experts, anthropologists, and archaeologists made it possible to recover and analyze plant and animal evidence at the site, along with the more traditional architectural and artifactual evidence.
The people of Jarmo had lived in rectilinear household complexes made from mud bricks. Their economy was based on growing and harvesting domestic emmer and eikorn wheat, barley, and lentils. They also harvested wild plants, such as field peas, pistachio nuts, acorns, and wild wheat and barley, and kept dogs, domestic goats, sheep, and later, pigs. However, they also hunted wild animals, such as cattle, onager, and other small mammals. The bones of lions, leopards, small wildcats, foxes, and lynxes were also found at the site, killed either for their pelts or to protect the occupants and their flocks.
The inhabitants of Jarmo made a variety of flint and obsidian tools ranging from large to very small sizes. Many milling and grinding stones were found as well as small celts and chisel-like implements and some stone beads, pendants, and bracelets. A small amount of obsidian was imported from Anatolia, and then worked at the site. Other imports included turquoise and marine shells. Stone bowls were made from local limestone, and a small amount of pottery was produced (an innovation that seems to have originated elsewhere) there. Many small clay figurines (human, animal, and geometric) were found, along with many bone tools (such as awls or perforators), bone spoons, and beads.
Our understanding of and interest in the transformation from huntergathering to food production has changed since the 1950s, when research focused on the environmental and population pressures that contributed to its occurrence. Prehistorians now focus on understanding the social reasons for the transformation, and the social and cultural consequences of such a major change in lifestyle. However, the importance of Braidwood’s work at Jarmo has not changed. It provided the empirical evidence that such great cultural and economic changes had occurred, evidence as to how these early communities had changed from wild to domesticated resources, and evidence that this evolution had taken place over a longer period than had been thought. For many years Jarmo was the oldest agricultural and pastoral community in the world. The interdisciplinary fieldwork Braidwood pioneered became the model for fieldwork investigations of important regional cultural and economic transitions, not only in western Asia, but also all over the world. The archaeological techniques and methodology Braidwood pioneered at Jarmo became central to mainstream archaeological research design.
Further Reading Braidwood, R. J., and L. S. Braidwood. 1950. Jarmo: a village of early farmers in Iraq. Antiquity 24: 189–195. Braidwood, R. J., and G. R. Willey, eds. 1962. Courses towards urban life. Chicago: Aldine. Watson, P. J. 1999. Robert John Braidwood, 1907-. In Encyclopedia of archaeology: The great archaeologists, ed. T. Murray, 495–506. Santa Barbara, CA: ABC-CLIO. Willey, G. R., ed. 1982. Archaeological researches in retrospect. Washington, DC: University Press of America.
Posted by Mitch Williamson at 10:57 PM No comments: