Celts at the End of the Millennium 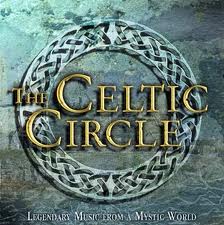 BARRY CUNLIFFE
Since 1970 there has been a subtle change in the vision of the Celt, with an increasing emphasis on the economic systems which underpinned society and the use of
The mounting of the spectacular exhibition ‘The Celts, the Origins of Europe' in Venice in 1991, under the auspices of Palazzo Grassi and sponsored by the multinational Fiat company, is an example of the current use to which the Celts are being put. The point was explicitly made by the President of Palazzo Grassi in his introduction to the exhibition catalogue The Celts:
This exhibition is a tribute both to the new Europe which cannot come into fruition without a comprehensive awareness of its unity, and to the fact that, in addition to its Roman and Christian sources, today's Europe traces its roots from the Celtic heritage, which is there for all to see.
It is in the light of this vision that one can best understand the initiative of President Mitterrand in providing lavish funds from the French state to support a new programme of multinational excavations at the Aeduian capital of Bibracte. In doing so he was echoing the gesture of Napoleon III, though for rather different political motives. 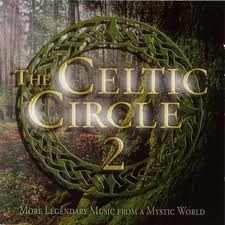 Jacquetta Hawkes summed it all up in the memorable thought that each generation gets the archaeology it deserves. Put another way, it is difficult, indeed impossible, to study the past without our understanding being encumbered and perverted by the impediment of the social mores in which we live and the transient values of the moment. At best, by attempting to understand the distortions of the past, we can be more on guard against introducing distortions of our own and accepting those forced on us by our political leaders.
There are currently two extreme perceptions of the Celts: the New Celtomania, which provides a vision of a European past to comfort us at a time when ethnic divisions are becoming a painful and disturbing reality, and a politically correct view, which argues that the term is so abused as to be useless except to those who wish to increase the sales of their books. Both views contain some threads of value but in their extremity they are sterile. There were, in Europe and beyond, peoples who were known as Celts, whose movements and behaviour are reflected in contemporary sources. They spoke a language which spread over a huge area, versions of which are still spoken and taught today in the western fringes of the former territory. Some of these ancient Celtic communities developed a unique art and a distinctive material culture, which spread throughout Europe, and in the remote west, in Ireland, echoes of their society come down to us through the written versions of a long-extinct oral tradition. These threads are real and are worthy of our attention.
Posted by Mitch Williamson at 12:15 PM No comments: 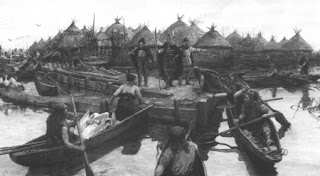 BARRY CUNLIFFE
Celtic domesticity as imagined by A. Forestier in his illustration of 1911, based on the excavated evidence derived from the examination of the lake village of Glastonbury, Somerset.
The growing awareness of the material culture of the pre-Roman Iron Age in the middle of the nineteenth century began to instil a new sense of realism into the study of late prehistoric Europe, but it was not until 1871, with the recognition that the cultural assemblages found in the graves of the Champagne and the lake-side site of La Tene in Switzerland were closely matched by those associated with a series of burials inserted into the ruins of the Etruscan town of Marzabotto, that the historic Celts could confidently be identified. Thereafter the belief that the movements of people could be traced in the archaeological record gained wide acceptance, and the invasionist model became central to much archaeological writing.
Material of La Tene type found throughout central and eastern Europe was directly related to the historic expansion of the Celts, though the extreme paucity of La Tene material in Greece and Asia Minor, where the Celts were known to have been active, was a salutary warning of the adage that absence of evidence is not evidence of absence.
In the west the situation was more complex. The study of ancient European languages had shown that forms of Celtic were spoken over much of the Iberian Peninsula, the British Isles, and Ireland, and yet there was no historical record of Celtic migrations into these areas. It was, therefore, left to archaeologists and linguists to construct models of invasion from their two disparate viewpoints. Since each relied heavily on the other, a considerable degree of circularity developed in the arguments. In Iberia the classical sources indicated a Celtic presence by the sixth century Be, and this was supported by linguistic arguments that suggested that the Celtic spoken in the Peninsula was more ancient than that recorded in Gaul. Thus it was incumbent on archaeologists to 'discover' evidence for the Celtic migration from west central Europe through the Pyrenees in the material culture of the Late Bronze Age. This approach was most influentially propounded by P. Bosch-Gimpera in his famous paper 'Two Celtic Waves in Spain' published in 1939 in the Proceedings of the British Academy. In Britain and Ireland invasionist theories were summed up in the elegant formulation of Christopher Hawkes, presented in a paper entitled 'Hillforts' published in the journal Antiquity in 1931, in which a series of migratory waves were envisaged.
Simple invasionist theories of this kind were in common use until the 1960s and are still found from time to time in the more popular literature. Their modelling was based partly on the classical accounts of Celtic movements, but also derived inspiration from an awareness of the migrations of the late Roman and early medieval periods. Behind it all lay the knowledge, gleaned from recent history, of the dramatic cultural changes, linguistic and material, that had been brought about by west European imperial expansion. This strengthened the implicit belief that cultural change was most simply to be explained as the result of folk movement.
The 'Celts' that emerged during this period still retained the image of the warrior intent upon feasting and raiding-in other words the classical vision but, in a century dominated by recurring war, much of it resulting from German militarism, a new image began to develop in which the 'Celt' was given a more homely, creative appearance in contrast to other barbarians, in particu1ar the 'warlike Germans': in other words the 'Celt' was becoming domesticated. This was subtly, and perhaps unconsciously, done by putting increased emphasis on artistic and technical achievements and on the 'hearth-and-home' aspects of the archaeological record. Such an approach was particularly well developed in Britain, where the creative originality of Celtic art had long been recognized, largely because the extreme paucity of cemeteries producing warrior equipment forced archaeological activity to focus on settlement sites and on the productive systems which maintained them.
The first recognizable ordering of the British agrarian landscape became known as ‘Celtic field systems', and the term was readily, if inappropriately, adopted in the Low Countries and Denmark, where isolated Celtic elements of material culture have tended to be given particular emphasis in contrast to the Germanic.
The Celt of the period 1870-1970 is, therefore, a complex creation. In the image of the nineteenth-century imperialists, he was prepared to fight his way into new territories, taking his women and children with him, but there to settle down to till the soil while the womenfolk spun, weaved, and ground the corn. His love of art was well developed and he was served by craftsmen of great originality and skill. Even his wife could add to the artistic ambience of the home by making pleasantly decorated pots. He was not unduly aggressive but would fiercely protect his family and home if danger threatened. The discovery of a
In France, too, opportunity for allegory was not lost. In the aftermath of the war, in 1949, a monument was erected on the plain of Les Laumes below Alesia. It records that
On this plain 2,000 years ago Gaul saved her honour pitting, at Vercingetorix' call, her peoples against Caesar's legions. After her reversal upon the battlefield, reconciled with the victor, united, defended against the invasions of the Germans, open to the enlightenment of Greece and Rome, she knew three centuries of peace.
Posted by Mitch Williamson at 12:08 PM No comments: