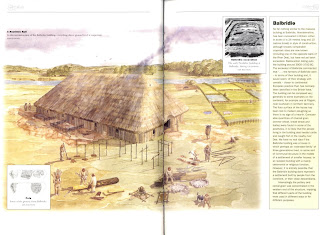 A timber hall was built at Balbridie sometime around 3,600 BC. Of similar construction to buildings found on the Continent, Balbridie was around 26m long by 13m and may have accommodated upwards of thirty people. The reconstruction gives some idea of how the timber hall may have appeared. Located by the banks of the River Dee, the site was near to a variety of natural resources and on good arable soil. Such sites are rarely found in Scotland and represent a self-supporting farmstead. Balbridie was destroyed by fire sometime before 3,250 BC.
Posted by Mitch Williamson at 9:47 PM 1 comment: 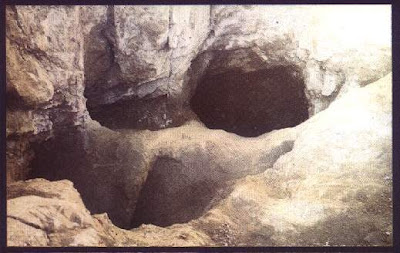 Eneolithic mines shafts with access platforms on Rudna Glava mine.

Early Neolithic mine on a hill top near Majdanpek dating to about 5000 BCE and one of the earliest known copper mines. It was researched between 1968 and 1989. It was excavated as part of the "Old Mining and Metallurgy of the Central Balkan" project, led by Borislav Jovanovic (Archeological Institute SANU) and Ilija Jankovic (Museum of Mining and Metallurgy in Bor). The ore was pulled out during spring or summer months, and prepared for processing and taken away toward surrounding villages and beyond.

The extraction of stone, ores, and minerals was an important complement to the farming economy of ancient European peoples. Early farmers mined flint for their tools at sites like Grimes Graves in England, Spiennes in Belgium, and Kremenets in what is now Ukraine, where the high quality flint was extracted from veins several feet below the surface. They also quarried outcrops of stone like amphibolite to grind into stone axes. The best-quality flint and stone would be traded over long distances. When the early farmers of northern and western Europe began to build large stone tombs and monuments called megaliths, either they used stones that were lying about the landscape, or they quarried stones and transported them over substantial distances. The bluestones that form the innermost circles of standing stones at Stonehenge came from the Preseli Mountains in Wales, 155 miles away.

Beginning around 5000 b.c.e. metals began to be used first for the manufacture of ornaments and then for tools. The earliest metal to be mined and used extensively in the production of tools, household implements, and other goods was copper. Early copper mines from the fifth and fourth millennia b.c.e. are found at places such as Aibunar in Bulgaria and Rudna Glava in the Federal Republic of Yugoslavia. Subsequently, copper sources were located in other parts of Europe, such as in Liguria in northwestern Italy and at Mount Gabriel in southwestern Ireland.

Copper tools were better than the stone tools of the earlier Stone Age because copper can be hammered and molded into many different shapes. Copper, however, is a relatively soft metal with limited usefulness. Early in the fourth millennium b.c.e. metalworkers discovered that they could toughen copper by mixing it with tin. The resulting alloy, bronze, gave its name to the Bronze Age, which extended roughly between 2500 and 800 b.c.e. Settlements where bronze played a prominent role in the culture and technology of the community have been found in islands of the Aegean Sea, home to the earliest European civilizations, the Minoans and Mycenaeans, as well as in central Europe, Spain, Britain, and Scandinavia.

While bronze was an advance on copper, it still was less durable and more expensive to make than the metal that supplanted it, iron. While iron came to be used extensively in the Near East, it was not until about 1100 b.c.e. that it found its way to Europe. In discussing European Iron Age cultures, historians and archaeologists refer to two primary periods. The first was the Halstatt Period, named after a town near Salzburg, Austria, where extensive salt-mining operations were conducted beginning about 1000 b.c.e. About 500 years later the La Tène culture developed in modern-day Switzerland. This culture produced an enormous amount of iron, and archaeologists have discovered numerous Iron Age artifacts from this region.

Mining for metals was a backbreaking business. While some metals such as gold could be found in nuggets in sandy soil or in water, the mining of copper and iron was more difficult, because the ore had to be dug out of the earth. First, a deposit had to be found. Ancient mining engineers were oft en able to locate a vein of metal by looking for stains in rock formations, riverbeds, and even in the water itself. Copper oxidizes (combines with oxygen) to form a greenish hue, while iron oxidizes to form brownish-red rust. Once a site had been located, workers dug shaft s with picks and shovels. The shafts were generally not very deep, perhaps about 30 feet, but deeper mines—some as deep as 300 feet—have been found.

Bronze Age miners then used stone hammers to break up the rock, but they also used picks and levers made from hardwood or antler. Archaeologists have discovered many hundreds of broken stone hammers at ancient mining sites, and the large number of such tools suggests that a separate group of men were on hand to make and repair tools; otherwise, the miners would not have been able to carry on their work. Another technique that ancient miners used was to heat the rock by building large fires against it. The heating and cooling cracked the rock, oft en to a thickness of a foot, making it easier to break it into pieces and haul it to the surface.

Iron Age mining was not radically different. Again, shafts were dug using picks and shovels. The ore was broken up with hammers and then carried in sacks up ladders to the surface, where it was further broken down, washed (that is, the ore separated from smaller bits of rock and sand), and made ready for smelting. Large cisterns of water were kept on hand for the washing process.

An important activity in ancient Europe was the mining of salt. Salt was a valuable commodity, for it was used in the preservation of food; it was so valuable that ancient Roman soldiers were oft en paid with salt, the origin of the modern word salary, and the ancient Greeks readily traded slaves for salt (giving rise to the modern expression that people “are not worth their salt”). A major center of salt production in ancient Europe was the area around Salzburg, Austria and the lakes to the east in a region called Salzkammergut (note the syllable Salz-, the German word for “salt”). Also, many German and Austrian place names contain the syllable hall, the ancient Celtic word for “salt.” This salt was left behind by ancient seawaters that covered the continent before they receded.

When salt occurs in large concentrations and is easily accessible, it can be mined just like any other mineral and carried out of the mine in large blocks, as at Hallstatt, where the miners had special leather backpacks for bringing out the salt. Where it is less concentrated or where groundwater flows through the salt deposits, it can be extracted by an evaporation process. Salt is highly soluble in water, so it can be extracted easily from the ground by dissolving it. Some ancient European salt mines consist of deep shaft s dug into the earth, oft en into mountainsides. After the shafts were dug, ancient salt miners let groundwater do much of the work. Large chambers were opened and then allowed to slowly fill with water, a process that could take up to 15 years. When the chamber was filled with brine, or salty water, it would be pumped out of the mine. At that point, the salty water was placed in large, shallow containers so that the water could evaporate. The salt left behind was fashioned into cakes for transporting. Over the centuries, numerous road systems were built principally for the transportation of salt. The Via Salaria in Italy is a good example.

Posted by Mitch Williamson at 10:41 PM No comments: 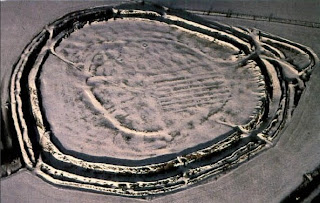 An aerial photograph of the Iron Age hill fort at Yarnbury, Wiltshire in England. The remains of an earlier structure show up inside the main ramparts.

The remains of human activity can sometimes be seen from the air, even when they are buried underground. In dry weather crops may grow poorly on thin soil lying over buried buildings and roads. Or crops may grow unusually well in the deep soil that is the result of long-forgotten pits and ditches being filled in over the years. Either of these effects can reveal signs of ancient settlements when they are photographed from the air.

Posted by Mitch Williamson at 10:39 PM No comments:

Conservators don't usually restore objects unless it is essential. Some objects, however, do need to be repaired or restored, particularly if they are to go on display in a museum. Pots are sometimes rebuilt and holes in damaged cloth may be repaired. But any restoration should be visible - at least to the trained eye - and it should also be reversible. The importance of this became apparent with the remains of a helmet recovered from the excavation of an Anglo-Saxon burial mound at Sutton Hoo, England. The helmet was originally reconstructed a decade after its discovery in 1939. However, ideas about what the helmet originally looked like changed over the years, and in 1968 the helmet was taken apart and reconstructed again - but this time it looked quite different!

Posted by Mitch Williamson at 10:38 PM No comments: