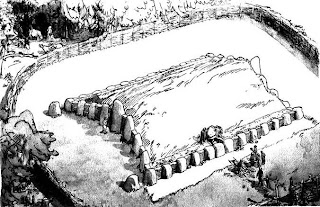 Reconstruction of Kong Svends Høj passage grave on the island of Lolland.

The rectangular mound is set within a kerb whose long sides are built of stones between 1.6 and 1.7 m in height. The two façades are slightly concave, and here the stones increase dramatically in size, with the tallest in the middle, rising 2 m above the basic kerb. This arrangement also suggests that the mound was roof-shaped, tallest in the middle. The stones in the south-eastern gable, although they differ petrographically (two of granite, two of porphyry and one pegmatite), were chosen specifically for their very strong reddish colour; the north-western gable unfortunately was not complete but the restorers thought that, in contrast, it was distinctly grey in character.

Apart from the impressive kerb, many rectangular and trapezoidal mounds have so-called guard stones (from the German word Wächtersteine) – conspicuously large monoliths associated with the corners. In most cases the chamber contained within the mound is a dolmen, but some passage graves with this feature are also known.

Posted by Mitch Williamson at 5:50 PM No comments: 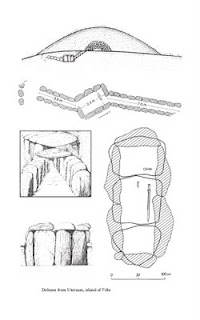 Within the general dolmen category there are also some sites where the ingenuity and skill of the builders, in combination with boulders of particular shapes, has occasionally led to construction of chambers that stand out from the general pattern. They cannot be ‘fitted’ into any of our typological standards but, at the same time, they offer exciting insight into the ingenuity and skill of the builders. A unique example comes from Utersum, on the north Friesian island of Föhr. The chamber, 1.8 m high and constructed of eight orthostats and three capstones, was entirely subterranean and had two passages (3.5 m and 7 m long) running in roughly opposite directions to one another, rising to the surface. The passages’ capstones were later used in the construction of a Bronze Age stone cist that overlay the earlier structure (Kersten and La Baume 1958, 320; Hoika 1990, 60).

Although architecturally simple, the south Scandinavian dolmens were nevertheless very sophisticated constructions, employing elements that would continue to be used throughout the time of megalithic building, culminating in the elaborate passage graves. Dry-stone walling filled the gaps between the orthostats of all forms of dolmen chambers; sometimes the chambers were additionally protected. A good example is offered by the two stone chambers at the long dolmen at Grøfte; these demonstrate most eloquently that the builders were concerned to keep the chambers dry, since both were surrounded by flat split slabs angled around each chamber to divert the rainwater to the outside, away from the chambers and into the mound (Ebbesen 1990, Figures 5 and 10–12).

Posted by Mitch Williamson at 5:40 PM No comments: