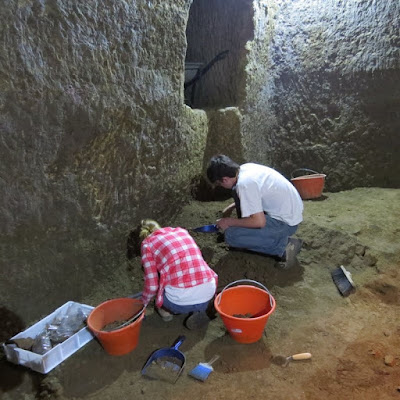 Excavation on the west wall of the hypogeum near the Etruscan tunnel that connects this pyramidal hypogeum (Room A) with an adjacent one (Room B). Courtesy Daniel George, Jr.

Archaeologists are scratching their heads about an underground pyramid-shaped structure they have been excavating beneath the historic medieval town of Orvieto in Italy. But it may not be a mystery forever. They hope to find answers as they continue to tease artifacts and architectural materials from the soil.

"We discovered it three summers ago and still have no idea what it is," write Prof. David B. George of St. Anselm College and co-director Claudio Bizzarri of PAAO and colleagues about the site. "We do know what it is not.  It is not a quarry; it’s walls are too well dressed. It is not a well or cistern; its walls have no evidence of hydraulic treatments."*

Calling it the "cavitá" ('hole' or 'hollow' in Italian), or hypogeum, the archaeologists have thus far excavated about 15 meters down. They marked their third year at the site in 2014. By then they had uncovered significant amounts of what they classify as Gray and Black bucchero, commonware, and Red and Black Figure pottery remains. They have dated deposits to the middle to the end of the 6th century BCE.

"We know that the site was sealed toward the end of the 5th century BCE," George, et al. continue. "It appears to have been a single event. Of great significance is the number of Etruscan language inscriptions that we have recovered – over a hundred and fifty. We are also finding an interesting array of architectural/decorative terra cotta."*

READ MORE
Posted by Mitch Williamson at 1:42 PM No comments: 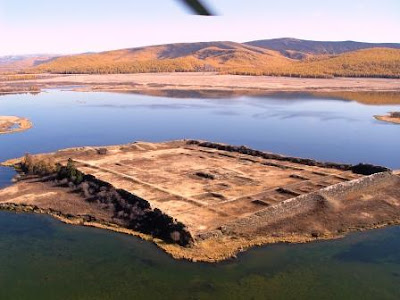 Por-Bazhyn from the air (looking northwest) before excavation in 2007. 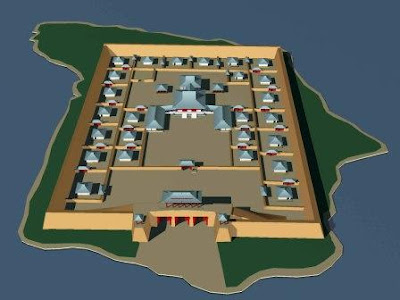 3-D reconstruction drawing of Por-Bazhyn based on excavation results 2007/8 (by R.A. Vafeev) 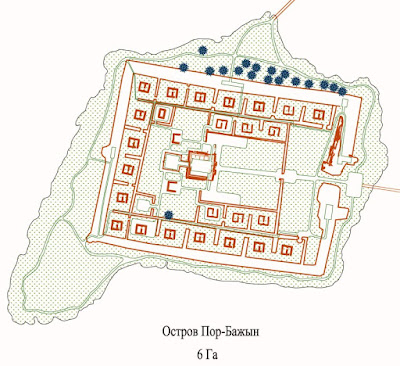 Por-Bazhyn (Por-Bajin, Por-Bazhyng,) is the name of a ruined structure on a lake island high in the mountains of southern Tuva (Russian Federation). The name Por-Bazhyn translates from the Tuvan language as "clay house". Excavations suggest that it was built as an Uyghur palace in the 8th century AD, converted into a Manichaean monastery soon after, abandoned after a short occupation, and finally destroyed by an earthquake and subsequent fire. Its construction methods show that Por-Bazhyn was built within the Tang Chinese architectural tradition.

Por-Bazhyn is a 1,300-year-old structure of 7 acres that takes up most of the small island on which it sits. Containing a maze of over 30 buildings, its high outer walls sit only 30 kilometers (20 mi) from the border with Mongolia. But over a century since its discovery, archaeologists are no closer to understanding who built this structure or why.

At first, researchers thought Por-Bazhyn was an ancient fortress of the Uighur Empire, nomads who ruled southern Siberia and Mongolia from 742–848. It’s constructed with a Chinese architectural style from that time. However, it’s so out of the way of trade routes and other settlements that competing theories eventually arose. Maybe it was a monastery, a summer palace, a memorial for a ruler, or an observatory for the stars. Evidence is accumulating that a Buddhist monastery was at the center of the complex, although only a few artifacts have been unearthed.

The complex does not appear to have been inhabited for long. Archaeologists found indications of earthquakes that may have caused a fire that burned some of the original site. However, the fire appears to have occurred after the island was abandoned for reasons unknown.

Posted by Mitch Williamson at 1:37 PM No comments: