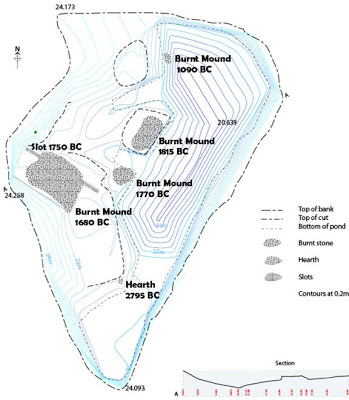 The prehistoric discoveries they have made on the banks of a long-lost lake on the Parc Glyndwr development site off Rockfield Road, Monmouth.

The latest radiocarbon dates. It looks as though the site is teeming with prehistoric remains, especially Bronze Age ones (we have found another burnt mound 50 yards away, just outside the development site) . . .

We were particularly careful with the charcoal sample from one of the slots - taking it as far from the mound as possible and inside the lower anaerobic clay; of course it's not absolute proof that it's not from the burnt mound but we are sure that the slot was cut into the surface of the mound when there was little, if any, covering soil - this is also clear in the section which would clearly show if the slot was cut from higher up. The date from inside the slot is earlier than that from the mound but with the 35 years each way I suppose that it comes out near enough the same. So far, the evidence is that the slots could be Bronze Age with not a scrap of evidence for Roman, as published by someone from Cadw, following a 10-minute visit to the site!

Gordon MacDonald's suggestion that there was access to the River Wye in the Bronze Age via a large post-glacial lake may not be so dodgy as I first thought. We have a water-worn Beaker barbed & tanged arrowhead from river gravels at 24 Monnow Street and the Mesolithic camp site on what appears to be a river bank in St. James' Street, both of these sites are just above the alluvium which would apparently be the edge of such a lake. The alluvium does connect our site to the rivers and Gordon, who has studied the Wye and Severn for many years, is convinced that the remains are linked to the building of the known huge Bronze Age boats. However, perhaps I will hold fire on that for the moment as there has been rather a lot of theorising - for now. The little Neolithic hearth had a loose stone surround and contained charcoal and a flint.
Posted by Mitch Williamson at 7:08 PM No comments: