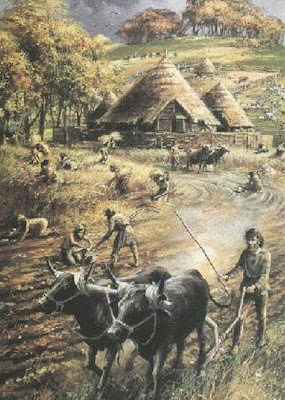 Mesopotamia
The first great advances in human technology were in the use of stone, bone, ivory, and wood that occurred in the Paleolithic Age. The development of fire and of human communication were two other fundamental technological developments whose origins are obscured by the distant past. TheNeolithic Revolution after 10,000 BCE led to signal developments in agriculture and early attempts to construct shelters of mud brick. The fire drill, a means of creating fire artificially by friction, was developed perhaps initially in ancient India. The Mesopotamians, discovering that clay is vastly more workable than stone, developed pottery as early as 6000 BCE. The kind of pottery produced required kilns hosting temperatures up to 1,000 degrees centigrade. In the same area of Mesopotamia, the potter's wheel was invented by unknown craftsmen about 4000 BCE. Mesopotamia was the region where two other technological and engineering discoveries were made. Remains of buildings dating back to 2100 BCE show a pitched-brick vault of sun-dried bricks narrowing in to form a conical enclosure. The Mesopotamians were perhaps also responsible for the first monumental architecture: the ziggurat at Ur, dedicated to the moon god Sin, which had four stories or huge platforms built one upon another leading to a pinnacle and a rectangular enclosure.

Writing
At some point in the distant past, early humans developed the means by which they communicated concepts, ideas, facts, and simple observations by spoken words. Scholars think that the development of language was an invention of a form of technology, a tool that could be used to generate ideas, reflect upon the past, and anticipate the future. Language was the means to conquer isolation of time and place. Names of things-natural, human, physical-allowed for systematization and categorization of ideas. Cuneiform symbols made with a stylus in wet clay developed in third millennium Mesopotamia in response to the need to record agricultural surplus. In Egypt, pictograph and ideogram hieroglyphics similarly allowed for human communication, an analysis of the divine, and stories of men and gods to be not just told but also recorded. Toward the end of the second millennium BCE, the Phoenicians of the eastern Mediterranean developed a simple twenty-two-letter alphabet that became the basis for the Greek and Latin alphabets. The Phoenician alphabet allowed Greek philosophers and scientists to begin to develop their conceptions of existence and analyses of reality. 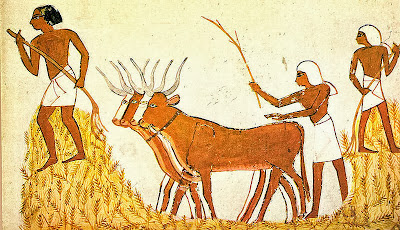 Pyramids
Some scholars believe that the Sumerians of Mesopotamia learned from the Egyptians how to make their step pyramids. The Egyptians most certainly were the master pyramid builders. Pyramids were constructed in several stages using ramps on which the large limestone blocks would be dragged up to the level of building activity. The higher the pyramid got, the wider the ramp had to be and the greater the number of ramps needed to accommodate the increasing structural pressure. Ramps would doubtless have been built along the sides of the pyramid. A step pyramid structure would have formed the inside of the outer pyramid to bolster it. Pyramids like the Great Pyramid of Cheops were built in the summer with the rising of the Nile so that water would bring barges close to the construction sight. Some scholars hypothesize that the Egyptians developed a working knowledge of pi [π] in building the pyramids.

LINK
Posted by Mitch Williamson at 5:54 PM No comments: