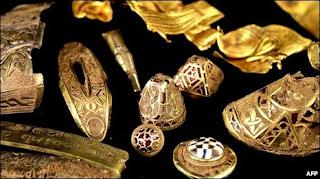 This treasure paints a new picture of our past and the Dark Ages.
What makes it outstanding is the sheer quantity - we're talking about 1,500 objects, almost entirely precious metal.
Normally you would expect a handful of objects each year of this quality for the period in question, which is the 7th Century.
A metal detectorist finding just one of these objects would consider it the find of their life. To find 1,500 is bizarre and it would blow the average person's mind.
Now, everybody wants to know who it belongs to and why it was put there. But those questions are tricky to answer.
For the Anglo-Saxon period, this is an awful lot of wealth for one person, or even one people, to have left in one place.
At the moment, we can say what it isn't, even if we can't say what it is. It's not associated with a burial, like Sutton Hoo was, for example.
Precious metal
After that, there are two main possibilities.
The first is that this treasure has been purposefully deposited, like an offering to a god.
But, from my 21st-Century perspective, I find it bewildering that someone could shove so much metalwork into the ground as an offering. That seems like overkill.
The other possibility is it's a treasure chest that got lost, or they couldn't come back for it.
The material is predominantly associated with war - swords, sword fittings, bits of helmets and the like - but all the precious metalwork has been stripped.
That means they're not treasuring the objects as wholes, they're taking the precious metals off and keeping them.
Most things we find from the Anglo-Saxon period are what we call "chance finds", in other words the things people lost, or hoards purposefully deposited, or finds from burials.
But hoarding is more associated with the Viking period. Things like big coin hoards are more a 10th-Century sort of find. This is a strange phenomenon in this country for the 7th Century.
People will now be working to understand when the material was deposited, then we'll look at what we know of the history - which is not a lot - to tie it down.
The finds date from a wide period, which is unusual, so the first thing this may do is help us improve our dating of the Anglo-Saxon period.
Much of what we know about this period is based on archaeology, not written evidence, because that written evidence is so scant.
We've got the objects, but not the historical context.
That's a problem because we understand the world based on what's written down, but we're not that good at understanding people from their material culture.
What would we make of modern society if we just looked at the material culture? What would we try to understand from it with no historical context to put it in?
Rulers overlooked
Yet that's what we're trying to do here.
I don't think it's realistic to identify this with a particular individual. We'll probably never find the owners, although the best bet is a ruler from the kingdom of Mercia, where it was found.
In this period some Mercian rulers, like Penda and Offa, are quite well-known to us. Penda is a bit before this period, and Offa is right at the end, so it has to be someone in the middle.
But our historical sources are limited to people like the monk Bede, who wrote from a Christian perspective.
The Mercian rulers at the time are likely to have been pagan, but they could have been overlooked by Bede even though they might have been important, because he wasn't interested in them - for whatever reason.
So this will help us look back at those sources, and those historical figures, with more scrutiny than we did before.
The Dark Ages were called the Dark Ages because it was seen as a period where, after Roman civilisation, somehow we went backwards in time.
But this demonstrates there were still wonderful objects being produced, and produced in this country.
It will take years, or decades, to get answers, and we still won't get all of them.
We can't just ask questions about this hoard, either - we need to ask questions about how this hoard fits in with everything else we know.
Have we made assumptions elsewhere that aren't right?
Those are the things we'd like to know about. It's very, very early days.
Posted by Mitch Williamson at 1:20 PM No comments: