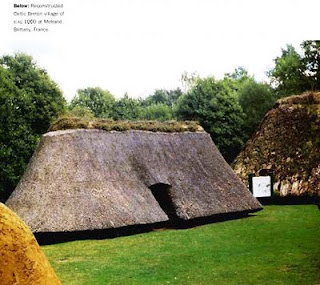 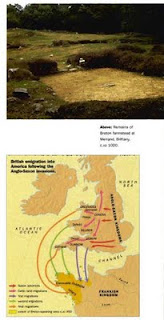 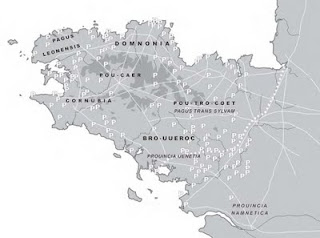 Early medieval Brittany: the Dark Age kingdoms. The approximate limit of Breton political power in the 6th century is shown as a dashed line; P = place-names in Plou attested before 1200; the white lines represent the Roman road network.

Despite their location on the European continent, the Breton language and associated culture owe their distinctive shape to origins on the Island of Britain, with especially close affinities to the pre-English groups of Cornwall (Kernow) and south-west Britain generally. For this reason, Breton is classed as an Insular Celtic language, despite its location. Settlers brought Brythonic speech and culture to Brittany (Breizh) in a series of migrations from the 3rd to 9th centuries ad, most heavily c. 450–c. 600, moving into an area of Gaul that had previously been known by the Gaulish name Armorica. The well-documented presence of a leader with the Brythonic name or title Rigotamus and known to the Gallo-Romans as ‘king of the Britons’ with 12,000 men on the river Loire (Liger) c. 470 represents an advanced stage in a process which had by then become well organized and included an important military component.

We do not have abundant evidence to show to what extent Gaulish was still a spoken language in Armorica when the Britons moved in. Clearly, there was some Latin spoken there, as throughout the Western Empire. However, to judge from extant Gallo-Roman remains, Armorica was not one of the most Romanized regions of Gaul. Repeatedly, for spans of several years at a time over the 4th and earlier 5th centuries, Armorica slipped out of imperial control and into the hands of armed peasant rebels, known as Bacaudae. The word itself is not Latin but Gaulish, and is probably related to the Breton and Welsh bagad ‘a band of men’. It seems inherently unlikely that the Bacaudae—from the most underprivileged and anti-Roman classes of the most remote region of Gaul—were all monoglot Latin speakers. We may note also a late Gaulish inscription from Plumergat, indicating that a learned Gaulish was still in use for prestigious occasions in the old territory of the Veneti c. ad 300 or possibly later. One may also point to a number of pre-Breton place-names which are clearly Gaulish, rather than Gallo-Roman, in character, for example, the name of the great megalithic site Carnac ‘Place of stone monuments’. It is likely, therefore, that Gaulish did survive, at least in some areas, to contribute names and words to the incoming Brythonic and possibly even influence its phonetics, morphology, and syntax. Some scholars, notably François Falc’hun, went as far as to argue that Gaulish was still a living language at the time of these migrations, and that Breton (particularly the Vannetais dialect in the old civitas of the Veneti, shows substantial influence from Gaulish, if it is not a direct descendant. However, any such argument flies in the face of the fact that the earliest Welsh, Cornish, and Breton are similar to the point of being often indistinguishable on linguistic grounds. It seems, therefore, that whatever Gaulish might have survived when the Britons arrived, it was the similar but distinct speech of the dominant incomers that was to become the standard variety of spoken Celtic in the peninsula.

Two 6th-century historians, the Byzantine Procopius and the Gallo-Roman Gregory of Tours, both demonstrate that Brythonic Brittany was an accomplished fact. The latter gives a detailed account of a peninsula ruled by chieftains with Brythonic names, whom the Merovingian Franks insisted on calling comites (counts), but who were effectively independent sovereigns. By the 570s Brythonic speakers were already dominant in an even further colony in north-west Spain called Britonia. However, we have only one near contemporary source that describes the migrations themselves, namely the De Excidio Britanniae of Gildas. Writing the better part of a century after the event, Gildas gives a luridly melodramatic account of an Anglo- Saxon ‘conquest’ from which the Britons had to flee, either to the west, i.e., Wales (Cymru) and Cornwall, or overseas to Brittany. Gildas, however, tells us that no British historical records had survived; he was therefore producing a stark and moralistic historical explanation of the distribution of Brythonic, Old English, and Gallo-Latin in his own day, and working from an admitted position of ignorance.

The spread of languages with the decline and collapse of the Western Empire—primarily the early Germanic languages such as Old English—has tended to be understood within the framework of Volkerwanderung (migration of peoples), i.e., a great post-Roman migration period. Applying this idea to Gildas’s testimony, the Breton migrations have been seen as a ‘knock-on’ or ‘billiard-ball’ effect, with Celtic migrants set in motion by an earlier Anglo-Saxon movement. However, a number of factors other than mass migration can influence the change from one language to another, including political or religious authority and social or economic pressure. The Armorican peninsula had close and bidirectional relations with Britain throughout prehistory and the ancient and medieval periods; therefore, the real processes behind cultural and linguistic Bretonization must have been a story of many complex increments. For example, is the Bacaudic prelude to the migrations to be viewed primarily as the story of a local power vacuum or an anti-Roman, philo-Celtic movement, or both?

Early Christian communities were clearly a factor in the Breton migrations. Le Duc has recently proposed that Romano-British Christians moved into Armorica as early as the 3rd century ad, when Christianity was still actively persecuted in Roman Britain (Celtic Connections 1.133–51). In a letter written between 509 and 521, the bishops of Tours, Angers, and Rennes (Roazhon) threatened to excommunicate, for their alien and unorthodox practices, two priests in Armorica with the Brythonic names Louocatus and Catihernus; thus we see the faltering grip of the Gallo-Roman hierarchy on a nascent Brittany with its own distinctive Christian practices. Traditional history has long held that the saints were leaders in the journey to Brittany. Breton Latin saints’ lives support this, both in their descriptions of actual migrations and in the connections between insular Britons and Bretons. Britonia in Spain probably had a similar origin. The study of Breton place-names suggests a detailed picture of settlement by British early Christians in the peninsula, especially the numerous archaic names (often still those of parishes and towns and villages of local importance) that comprise the element Plou- the name of an early Brythonic saint or an obscure element popularly understood as a saint’s name. In many instances, the same saints’ names are found in parish names in Wales and Cornwall.

From the standpoint of social history, the model of colonization—though without the word’s modern political overtones—is probably appropriate for the Breton migrations, in that the movements seem to have been largely voluntary, and conducted on the scale of family groups and small religious communities, rather than mass conquest by a hostile invading force. The prior inhabitants of Armorica—whose initial resistance to Rome had been fierce and whose position within later Gallo-Roman society had been increasingly marginal and precarious—were probably gradually incorporated into the new society rather than being driven out, destroyed, or having suffered some depopulating catastrophe, as previous theories have proposed. Whatever the circumstances of the original impulse to settle Brittany from Britain, it is certain that the connections between Brittany, Cornwall, and Wales were maintained for centuries, facilitated by a common language, trade networks and other economic factors, and the relative ease of travel by sea. Subsequent settlement from Brittany to Britain and vice versa occurred throughout the Middle Ages, both in the context of the Norman invasion of Britain and independently. The family of Geoffrey of Monmouth is believed to have been of Breton origin.

Posted by Mitch Williamson at 1:50 PM