THE COST OF BUILDING THE STONEHENGE COMPLEX 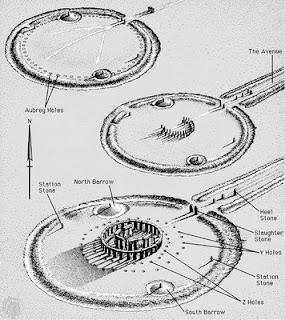 A standard formula has been used to calculate how long it would have taken to create earthworks in chalk country, based on the volume of chalk shifted and the mean distances vertically and horizontally that it had to be moved. The figures arrived at here for transporting and raising the stones are lower than those normally quoted because I am assuming oxen were used for pulling. The figure for sarsen lintel raising is based on the Atkinson method, not the Pavel method. The convention of using the term ‘manhours’ is used, although most of the work would probably have been done by young teenagers: ‘child-hours’ would be nearer the truth.

Interesting and unexpected results emerge from these new calculations. The spectacular Stonehenge IIIa design took a comparable amount of labour as building the Great Cursus and thus, by implication, could have been built by a community of comparable size. certainly absorbed an enormous amount of labour, but not nearly as much as is conventionally assumed. The total figure arrived at (admittedly a minimum figure) is less than a tenth of the 30 million man-hours often quoted, partly because the use of sledges and oxen is assumed. Even so, by the end (i.e., around 1100 BC) Stonehenge had absorbed thirty times as much labour as I.

At the other end of the time-scale, it is clear that the causewayed enclosure required a large amount of work, and represents a significant community effort as early as 3900 BC. This background context of large communal work projects is vital to any understanding of . Even though took a large amount of labour it still, incredibly, represents only half the work that was invested in ritual monuments in that (100 sq.km) area, the clearest possible indication of ceremonial hyper activity.

Posted by Mitch Williamson at 3:46 PM