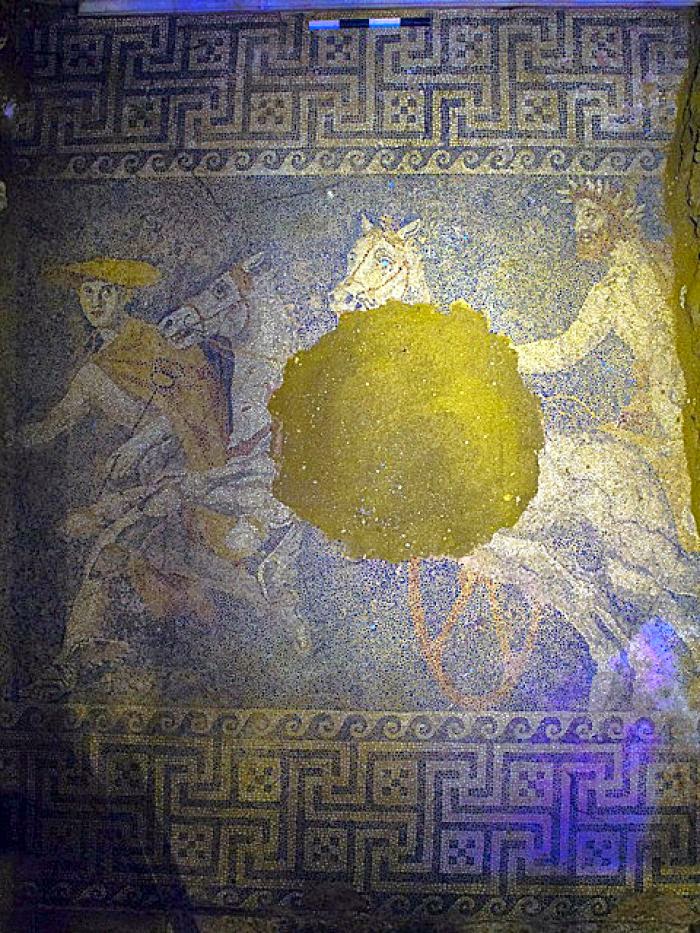 The mosaic depicts Hermes, the messenger of the gods in front of a horse drawn chariot.

An imposing mosaic of a man driving a chariot has been uncovered in the largest antique tomb ever found in Greece.

Archaeologists unearthed the tomb dating to the time of Alexander the Great in August at Amphipolis in northern Macedonia.

The mosaic dates from the 4th century BC.

Tiny pieces of white, black, blue, red, yellow and grey create a picture of a chariot drawn by two white horses, driven by a bearded man wearing a crown of laurel leaves.

Hermes, the messenger of the gods in ancient Greece, stands in front of the chariot.

"This mosaic, the largest on the site, measures 4.5 metres by three metres and is not completely uncovered," the Greek culture ministry said in a statement.

Archaeologists think the magnificence of the tomb means it was built for someone very important.
There is widespread speculation over who was buried at the site: from Roxana, Alexander's Persian wife, to Olympias, the king's mother, to one of his generals.

"The tomb is definitely dated to the period following the death of Alexander the Great [in 323BC], but we cannot say who it belonged to," supervising archaeologist Katerina Peristeri said.

Built on the banks of the river Strymon, 60 kilometres from the modern city of Serres, Amphipolis was an important city of the ancient Macedonian kingdom under Alexander.

Roxana and her son Alexander were exiled to Amphipolis and murdered there on the orders of the Macedonian king Cassander around 310BC.

There were no suggestions the tomb could have belonged to Alexander himself, who died in Babylon, in present-day Iraq.

Posted by Mitch Williamson at 6:48 PM