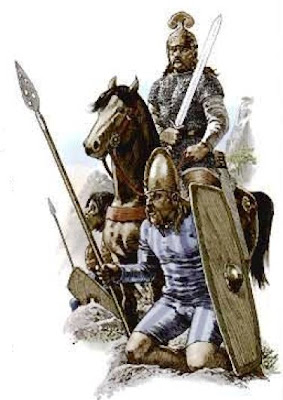 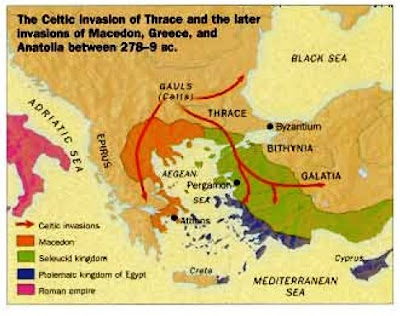 Around 279 B.C. Delphi became the target of Galatian invaders who looted the sanctuary. These attacks immortalized Celts as barbarian aggressors in the psyche of Roman and Greek citizens. At various times throughout the fourth and third centuries B.C. Celts served as mercenaries in Carthaginian, Etruscan, Greek, and Roman armies.

Celtic migration refers to the Late Iron Age expansion and resettlement of people affiliated with various Celtic tribes. Historic sources establish the start of this period of upheaval at about 400 B.C. This date is supported by archaeological evidence that indicates an intensive and rapid southward spread of Celtic cultural material and practices. However, archaeological investigations also suggest that 400 B.C. was not the beginning of movement for Celtic peoples and indicate that such migrations were not an isolated phenomenon.

Economic disruption and social transformation were experienced across south-central and eastern Europe throughout the latter half of the final millennium B.C. By the fifth century B.C. population pressure had compelled the Greeks and Phoenicians to establish colonies at coastal Mediterranean sites, such as Massalia (Marseille), Emporion (Ampurias), and Carthage. The fourth and third centuries B.C. were a time of national redefinition and included the consolidation of Greece and Macedonia under Philip II of Macedon, followed by the conquest of Persia and Egypt by his son Alexander III (Alexander the Great). Roman territorial expansion contributed to regional destabilization and population movement throughout Etruria and parts of Iberia, setting the stage for the Punic Wars. Celtic warriors participated in most of these conflicts as mercenaries.

The first wave of historically documented migration is archaeologically evident both at its point of origin (the Champagne region of France) and in the area that was invaded (the Po Valley of northern Italy). Reduced population in Champagne is indicated by the abandonment of settlements and by a decrease in graves, especially those belonging to young adult males. Chariot burials, in particular, practically disappear. Throughout the Cisalpine region (which now forms part of northern Italy), foreign burial practices attest to the arrival of Celts, who established themselves across the plain of the Po River. In Bologna grave markers from the era depict combatants armed with weapons of northern (Transalpine) design. Also burial sites have yielded grave goods that were carried south by the deceased or their acquaintances. Bologna itself was renamed from Etruscan “Felsina” to Celtic “Bononia.” Body adornment in the form of bow-shaped brooches (fibulae) of a Transalpine La Tène style are distributed from Champagne and Burgundy across Europe to the Carpathian Basin and south of the Alps throughout Italy. Not all of the invaders were satisfied to remain in northern Italy.

Around 390 B.C. a Celtic invasion force sacked and looted Rome. According to the Roman historian Livy, writing in the first century B.C., the event was witnessed by residents who had taken refuge in the citadel. The city was later ransomed, and the barbarians packed their plunder and left. The effect of the devastation was profound and influenced Roman military commanders in their interactions with Celtic warlords for centuries. Julius Caesar, for example, rushed to meet the Helvetii in 58 B.C. to prevent them from turning south into the Po Valley. Following the battle, he turned the survivors around and provisioned them to make certain that they would continue on their eastward journey back to Switzerland.

The path of migration appears to have first traversed the Alps along the western side of the Italian Peninsula but was soon expanded to include routes south from Bohemia. A delegation of Galatian Celts met Alexander the Great on the banks of the Danube during his campaign in the Balkans in 335 B.C. The source is Ptolemy I, later the ruler of Egypt, who was present on the occasion. Celtic incursion into Thrace, Macedonia, and Greece in about 280 B.C. was the culmination of frequent movements of war parties that had begun nearly a century earlier. Delphi was attacked around 279 B.C. by Brennos, who led his warriors to the temple of the Oracle, which they burned. There is no evidence for Celtic resettlement in Greece, and artifacts associated with the assault on Delphi are few.

Classical sources settled upon various accounts to explain why Celts left their homeland and journeyed south through Alpine passes to establish communities in Italy and Asia Minor. A report by Livy states, “There is a tradition that it was the lure of Italian fruits and especially of wine, a pleasure then new to them, that drew the Gauls to cross the Alps and settle in regions previously cultivated by the Etruscans.” The Greek scholar Dionysius of Halicarnassus elaborates on this sequence of events, saying that the Gauls were enticed to Italy with wine, olive oil, and figs and were told that the place was occupied by men who fought like women and would offer no real resistance. According to these two authors, the quality of life available on the Italian Peninsula attracted Celtic immigrants. In another version, the Greek geographer Strabo reports that tribes joined forces in pursuit of plunder. A further account says that population stress prompted consultation with the gods who directed one brother to take his followers to the Hercynian uplands in southern Germany while the other was told to take the more pleasant road into Italy. Scholarly analysis suggests that population growth was a contributing factor, along with a deteriorating climatic phase. These conditions, combined with the disruptions in the traffic of Mediterranean imports that followed the establishment of Roman colonies competing with the Greek trading post at Massalia, may indeed have been sufficient cause.

It is probable that the migration that began in the Champagne region was motivated by a desire to acquire luxury goods and wine and that it was carried out by young adult males of the warrior aristocracy, as the archaeological evidence indicates. However, movements such as that of the Helvetii included men, women, and children, and they were most likely motivated by other factors that included hardship.

Migration contributed greatly to restructuring Celtic society. Large numbers of Celts were introduced to different lifestyles in the various Mediterranean civilizations. When they returned to their homes north of the Alps (and many of them did) they brought back coinage and an appreciation of its use. They also transported ideas, technologies, and objects that they acquired, along with contacts that enabled them to enter into new trade relationships. Further, the process of migration itself had temporarily reorganized tribal units. During migration, loose coalitions of otherwise distinct groups formed under the leadership of single individuals. Post-migration Celtic Europe during the protourban oppida phase (150–50 B.C.) reflects these economic and social transformations.

Livy. The Early History of Rome: Books I–V of the History of Rome from Its Foundation. Translated by Aubrey de Selincourt. Baltimore, Md.: Penguin, 1965.

Posted by Mitch Williamson at 11:34 AM