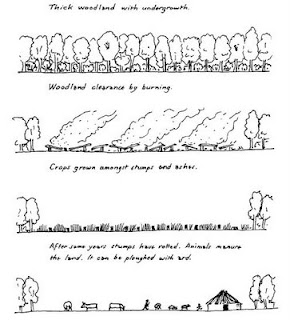 The effects of forest clearance. 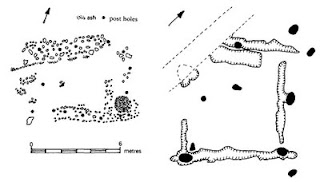 Plans of rectangular neolithic houses from southern Britain at Haldon (Devon) and Fengate (Cambs). (After Willock, 1936 and Pryor, 1974)

Pollen records show that practically the whole of Britain was covered with deciduous woodlands. Even the granite uplands of Dartmoor were forest-covered. Tall trees with high, thick canopies produced dark, cathedral-like voids beneath. The varying subsoils supported different densities of undergrowth between the trees. On the escarpment edges of the well drained chalk and close to the water in the river valleys it was easier to move amongst the trunks, and it was there in particular that the first farmers began to make their clearings. Using sharp polished stone axes, trees were felled to provide cultivation patches and grazing areas. A polished stone axe, professionally used, can cut down an average tree (the thickness of a telegraph pole) in about 30 minutes. In 1954 experiments by the Dane Jobs. Iversen suggested that one man could clear a hectare of forest in five weeks. Iversen used flint axes mounted in modern hafts in the manner of surviving prehistoric examples, and chopped the trees at knee height. Trees more than 35 cm. (14 in.) in diameter were ring-barked and left to die. Selected trunks and bigger branches would be trimmed and stored for building purposes. Small branches and leaves could be heaped around the bases of tree trunks and burnt. It was found that larger, unwanted trunks had to be stacked before they could be burnt.

The resultant cleared areas would be rough, with large stumps sticking out here and there, but a covering of rich ash would encourage the growth of crops once the seed had been scattered and raked with branches. Unfortunately the nutrients in the ash would be washed out after a few heavy rainfalls, and the clearings would only produce crops for five or six seasons before the yields began to fall. At first only digging sticks were used to break up the soil until the tree roots rotted away; after that it was possible to bring in a simple plough called an ard, which cut a single furrow.

Clearings were expanded as time went by, and if abandoned were temporarily prevented from regenerating by grazing animals, who would in turn refertilize the area with their manure (fig. 9). Linking trackways and expanding clearings gradually led to long stretches of open countryside, especially on the chalk and limestone hills, where ridgeways such as the Icknield Way came into being, facilitating long distance travel and the opening of the interior.

Evidence for early agriculture exists in various forms. In Wiltshire ard-marks were found criss-crossing the land surface beneath the South Street long barrow. Impressions of grain found baked into the clay of pottery and carbonized seeds tell us that two types of wheat, emmer and einkhorn, were grown in the south of England, with lesser quantities of barley. In northern Britain barley appears to have been much more common. The ears of grain were cut using flint sickles or plucked by hand and the seeds were ground into flour on flat blocks of stone known as saddle querns.

The arrival of the first farmers marks the approximate beginning of the period which archaeologists have traditionally referred to as the neolithic period or New Stone Age. It can conveniently be divided into two phases. The earlier neolithic period from about 4200–3500 BC was the period when plain pottery bowls were produced and causewayed enclosures, chambered tombs and earthen long barrows built. The later neolithic period from 3500–2100 BC is marked by decorated pottery, cursus and henge monuments and smaller long and round barrows.

Settlements of the earlier neolithic period are elusive and less than a dozen house structures are known from Britain. None of them compare with the long-houses of Holland and Germany. At Haldon in Devon an oblong, timber-built house with stone footings measured 7.6 by 4.8 m. (25×16 ft). It seems to have had a gabled roof and there were signs of a hearth in one corner, separated from the main room by a dividing wall. Another similar house, but double the size of that at Haldon, was excavated at Fengate near Peterborough in 1971. It had been of massive timber construction with footing trenches for plank walls. The average size of British neolithic houses seems to have been about 8 by 4.5 m. (27×15 ft) giving an interior area of some 36 sq. m. (405 sq. ft), roughly the size of the ground floor of a Victorian terraced house. Perhaps it would be more accurate to see the majority of neolithic houses as temporary, tentlike structures which left little trace in the ground, except for occupational debris, hearths and storage pits.

Field walking in parts of the Thames Basin by Robin Holgate has revealed scatters of flint defining areas of domestic settlement on the chalk and limestone hilltops and hillslopes, often, but not always, associated with burial monuments. Evidence of extensive settlement in the valley bottoms is not found until the later neolithic period.

It seems probable that domestic sites were not occupied for long periods but that the farmers moved around a restricted block of territory seeking out new land for grazing and cultivation as the old land became exhausted, perhaps returning to an abandoned plot after about 20 years. Holgate has noticed that on the margin of the settled areas were the large earthwork sites known as causewayed enclosures, probably the first ‘architecture’ to be constructed in Britain.

Posted by Mitch Williamson at 3:26 PM