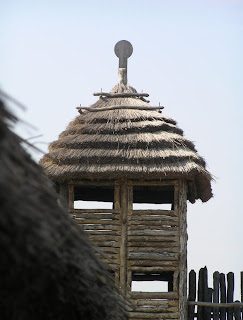 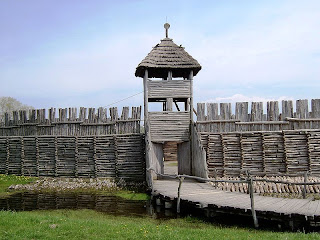 Views of wall of reconstructed gród at Biskupin

The Biskupin site is a fortified settlement in Poland, occupied between the Late Bronze and early Iron ages, and belonging to the Lausitz (Late Bronze age) and Hallstatt C (Early Iron) cultures.

Known as the "Polish Pompeii," Biskupin was a walled settlement of about 800-1000 people on an island in the Warta River Valley about 500 BC. The planned settlement included thirteen parallel rows of densely packed together houses separated by corduroy timber roads. The 105 houses in Biskupin were packed so close together that there was only one roof to every three to ten houses. Around the settlement was a ring road, which itself was surrounded by a wall, 550 meters in circumference and about 3.5 meters wide and 3 meters high. The wall was built by a series of wooden boxes filled with dirt and stones

The site was discovered in the 1930s and excavated by Jozef Kostrzewsk of Poznan University. Its remarkable preservation has led to the reconstruction of some of the buildings, which are now open to the public.

History of the excavations

The site was excavated from 1934 onwards by a team from Poznań University, led by the archaeologists Józef Kostrzewski (1885-1969) and Zdzislaw Rajewski (1907-1974). The first report was published in 1936. By the beginning of 1939, ca. 2500 m² had been excavated. The settlement soon became famous in Poland, officials of the Piłsudski regime, members of the military and high churchmen, like the primate of Poland visited the site. The excavation soon became part of Polish national consciousness, a symbol of the achievements of the Slavonic forebears in prehistoric times. The site was called the "Polish Pompeii" or "Polish Herculaneum". The existence of a prehistoric fortress, 70 km away from the border to the aggressive German neighbour was taken to show that the prehistoric "Poles" had held their own against foreign invaders and plunderers already in the Iron Age. Biskupin featured in paintings and popular novels.

When the Germans occupied parts of Poland in the autumn of 1939, Biskupin became part of the Warthegau, an area that German Nationalist claimed to have been "Germanic" since at least the Iron Age (Gustaf Kossinna, Das Weichselland, ein uralter Heimatboden der Germanen, Leipzig, Kabitzsch 1919).

Biskupin was renamed "Urstädt". In 1940, excavations were resumed under the patronage of Heinrich Himmler by the SS-Ahnenerbe under the supervision of Hauptsturmführer Hans Schleiff, a classical archaeologist who was to excavate in Olympia, Greece as well. Schleiff published only two short popular accounts that describe how Germanic tribes overran the 'small Lusatian settlement'. The excavations were continued till 1942. When the Germans retreated, the site was flooded, which ironically led to the good preservation of the ancient timbers. Excavations were resumed by Polish archaeologists after the war and lasted till 1974.

There are two settlement periods at Biskupin that follow each other without hiatus. Both settlements were laid out on a rectangular grid with eleven streets that are three meters wide. The older settlement consisted of ca. 100 oak and pine log-houses that are of similar layout and measure ca. 8 x 10 m each. They consisted of two chambers and an open entrance-area. An open hearth was located in the centre of the biggest room. There are no larger houses that could indicate social stratification.

The settlement was surrounded by a fortification that is 3,5 m wide. It is made up of oak trunks that form boxes filled with earth. The rampart is more than 450 m long and accompanied by a wooden breakwater in the lake. 6000-8000 m³ of wood have been used in the construction of the rampart.

There is a migration period (200-400 AD) settlement and a medieval stronghold on the peninsula as well.

The settlement at Biskupin belongs to the Hallstatt C and D periods (early Iron Age). There are four Radiocarbon dates from Biskupin (all B.C.):

Posted by Mitch Williamson at 11:43 PM