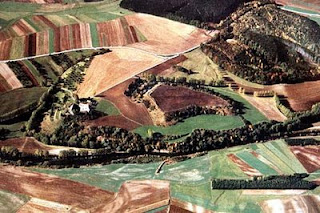 Aerial view of the Heuneburg hillfort with the Danube River in the foreground.

" Undoubtedly Heuneburg can be considered as
the best investigated hill-fort of the early Celts.
Its fame derives mainly from its Mediterranean-
type mud-brick wall built on stone foundations
about 600 B.C. The fortified hilltop settlement
existed for about 150 years. "

" The Heuneburg is located roughly 3km NE of
Hundersingen on a promontory immediately
above the . From the late Neolithic (3rd
millennium BC) until the time of the Saxon
emperors (11th c. AD) this spot was repeatedly
built up as a fortified hill settlement. The defense
systems of the Bronze Age (2nd millennium BC)
and the Middle Ages have had the most impact
on the present form of the hillfort.

Fourteen times its buildings all made of wood
were renewed. The settlement was destroyed
three times by force. The most drastic break is
marked by the first destruction. There is no
renewal of the brick wall; instead, all the
succeeding walls were made in the traditional
rubble-wood technique. The former pre-urban
character of the settlement was replaced by
buildings of farmstead type encircled with fences
and ditches. The radical economic change shown
by the changes in building can be seen as well
with the livestock, where the formerly dominant
pigs were replaced by cattle. Like other centres
of the Hallstatt zone, Heuneburg took control over
the resources of the region and over important
trade routes. As far as the Heuneburg is
concerned, there is a significant break in
continuity. "


A Landscape of Ancestors: The Heuneburg
Archaeological Project (Bettina Arnold)

Posted by Mitch Williamson at 11:32 PM